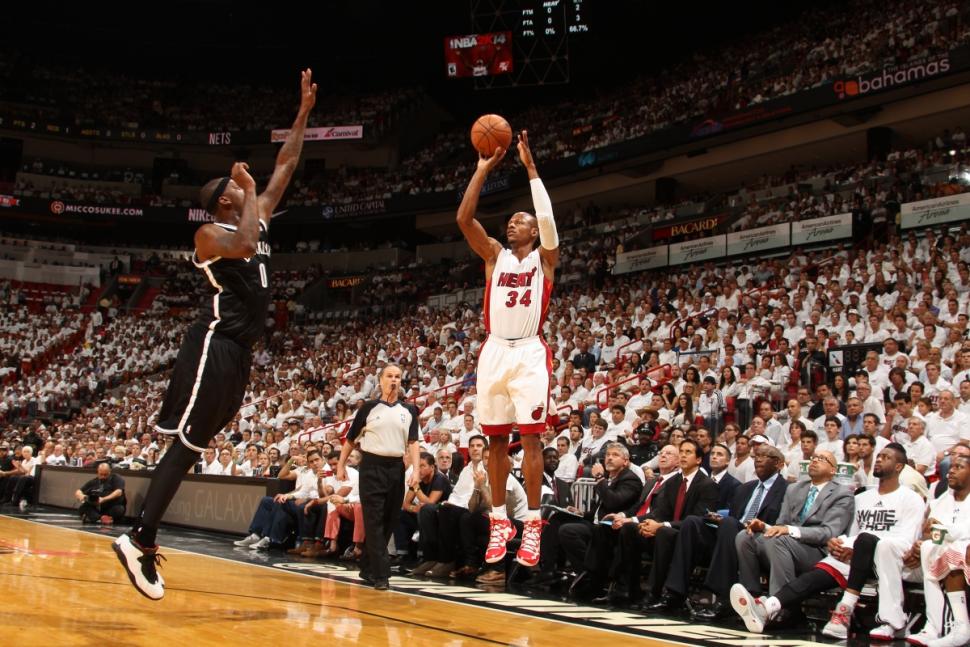 (Miami, FL) — It was two years ago when Ray Allen left the Boston Celtics after four seasons and an NBA Championship, but what he really left behind were two teammates in Paul Pierce and Kevin Garnett, who felt the sting of betrayal.

With a chance for the Miami Heat to close out the Brooklyn Nets in game five, Allen had the last laugh, sending his former teammates home with a 96-94 win.

“We are happy he’s on our side,” LeBron James said of Allen.

Allen, the greatest statistical three point shooter of all-time, made just 2-of-13 shots from deep over the past three games. However, with 30 seconds remaining, Allen made a clutch three to propel Miami to a 93-91 lead, its first of the fourth quarter. The shot was the biggest three of his two year career with Miami since his game tying three last year in game six of the NBA Finals against the San Antonio Spurs. Allen finished with 13 points but it was his final points that proved to be the most essential.

“You would think he didn’t have any rhythm making just one three but that’s Ray, he always finds a way,” Heat Head Coach Erik Spoelstra said.

Down 95-93 with nine seconds left, Pierce lost the ball out of bounds after James slapped at his wrist, but possession stayed with Brooklyn. In a last ditch effort, Joe Johnson drove right but was stripped by James as time expired and the season expired on the Nets.

To say it didn’t start well for Miami would be a drastic understatement.  In the first half, Miami shot an abysmal 1-of-16 from the three point line and managed to connect on just 34-percent of their total shots. Halfway thru the third quarter, James had just nine points, connecting on only two-of-eight shots. With a chance to wrap up the series and move on to the Eastern Conference Finals, James scored 20 of his 29 total points in the final 16 minutes for an encore of his historic 49-point night on Monday.

“For us it was about getting stops,” Dwyane Wade said. “We knew offensively we needed to execute, but we weren’t going to win this game unless we got stops.”

With eight minutes remaining in the game, Miami found a way to pull within two points but before the Heat could get any closer, Johnson and Pierce led Brooklyn with seven unanswered points, increasing their lead to 82-73.

Seemingly in command, Brooklyn held an eight point lead with three minutes remaining when Wade found James wide open for a corner three pointer to cut the lead to 91-86. Although still trailing, the shot brought the electricity back into the American Airlines Arena crowd, as Miami carried the momentum and finished on a 13-3 run in the final four minutes.

“You are built for this,” Heat Head Coach Erik Spoelstra said to his team during a timeout.

Wade silenced the murmurs that he was hampered by a hand injury he may have suffered in game two.  Wade attacked the paint aggressively, channeling his inner “Flash” that has made him a three-time NBA Champion. He finished with a series high 28 points and efficiently made 55.5-percent of his shots in game five.

“He’s a playoff warrior, he was able to find his way to the rim,” Spoelstra said about Wade’s performance.

The final piece of the “Big Three”, Chris Bosh, took advantage of being defended by Garnett who often got caught playing help defense in the paint. Bosh, who finished with 16 points, found ways to extend to the three point line, connecting on 4-of-6 shots from beyond the arc to keep the Heat within striking distance.

Johnson continued to shine offensively for the Nets, totaling a game high 34 points and nabbing seven rebounds. When Brooklyn needed a basket late in the game, Johnson isolated himself with James guarding him, and found a way to score with Pierce on the bench with five fouls.

“Joe Johnson was a handful we kept telling (LeBron) to just stay with it,” Spoelstra said.

Pierce had his best game of the series, scoring 19 points and showing flashes of his younger self when he earned the nickname “The Truth”. Despite his efforts it wasn’t enough to overcome the collective team breakdown in the final minutes.

“You can’t get caught up in frustration or trying to come up with a ten point play,” Spoelstra said about the fourth quarter comeback. “It takes incredible focus to take it just one possession at a time.”

The Heat have earned a chance to rest as they await the winner of the Indiana Pacers-Washington Wizards series. Indiana leads the series 3-2 with game six to be played in Washington, D.C. on Thursday night.  Miami has moved on the Eastern Conference Finals for the fourth straight year, with a chance to do something the Chicago Bulls and the legendary Michael Jordan never accomplished; play in four straight NBA Finals.

“This is the reason why we came together four years ago; to put ourselves in a position to compete for a championship,” James said.