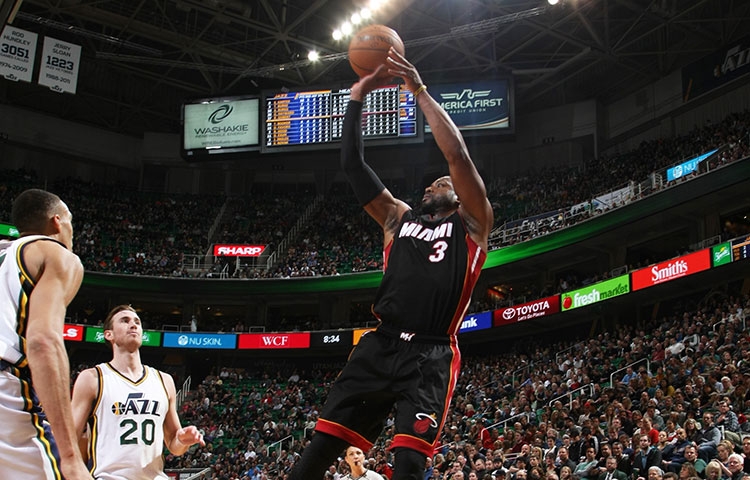 (Salt Lake City, UT) — The Miami Heat squeaked out a victory on Friday Night at EnergySolutions Arena as they came away with a 100-95 victory against the Utah Jazz.

The Jazz, who had recently come off a surprising victory over the San Antonio Spurs, were hoping to repeat their success against an ailing Heat team, who were without the services of Josh McRoberts, Chris Andersen, and at the last-minute decided to play an ailing Dwyane Wade.

Wade, who had only eaten a bowl of chicken noodle soup 24 hours prior to tip-off, summoned the energy to start against the Jazz and dropped a season-high 29 points on a super efficient 10-16 from the field to go along with seven assists.

“He dug deep tonight. We all just appreciated that he was just out there with his spirit but then to have a game like that was tremendous,” Heat head coach Erik Spoelstra said of Wade.

The Jazz made a late fourth quarter rally to bring the team to within three after Wade’s missed free-throw attempt with 5.2 seconds remaining; however, rookie Joe Ingles made a critical error as he could not inbound the ball within five seconds, resulting in a violation.

Luol Deng, who finished with 14 points and six rebounds, said of the play, “I knew they were trying to go to (Gordon) Hayward at the top of the key. I just wanted to be on top of him and change his route so he’d be in the 2 area, instead of the 3. As soon I saw them line up, we knew the play and put ourselves in position to stop it.”

On the ensuing possession, the Jazz were forced to foul Norris Cole, who iced the game with two free throws, giving Miami the lead for good.

Chris Bosh also had a decent showing, providing 22 points on 9-16 shooting in addition to nine rebounds and two blocked shots. Bosh applauded the team’s defensive effort on the night, “We felt like we could salvage the road trip with a solid win tonight but we knew it wasn’t going to be easy. Defensively, we answered the bell.”

The Heat return home on Sunday night as they face off against the always-scrappy Chicago Bulls at 6:00 PM E/T.