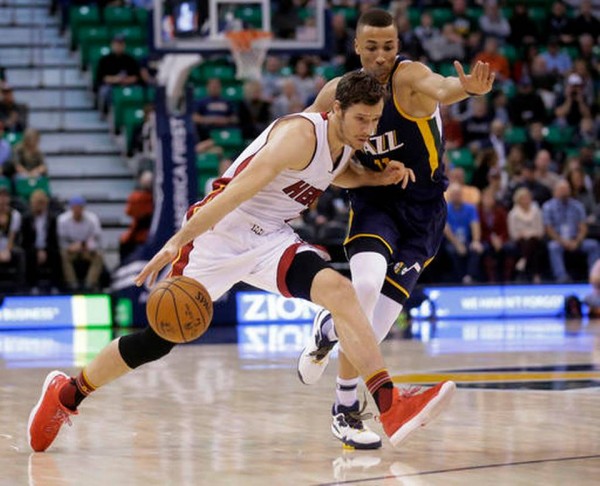 Point guard Goran Dragic was absolutely superb and stepped up for his injury-riddled Heat squad, going off to tie a season-high with 27 points to go along with six assists and four rebounds.

“I’m just happy that we came out with a win,” Dragic said. “Back-to-back, we played great defensively in both of those games. I feel like we played unbelievably offensively and defensively, and this is the result.”

The fourth quarter was a nail-biter for the Heat, who led by as many as 12 points but still managed to hold on for their most impressive road win of the season.

Jazz rising star Gordon Hayward, who finished with a game-high 32 points and seven assists in 40 minutes played, missed a 12-foot jumper as time expired to preserve a win for the Heat.

Power forward James Johnson and shooting guard Wayne Ellington, who each shot 5-of-7 from the field to end the first half with Miami leading 52-48 over Utah, finished the game with 24 and 17 points respectively.

“It takes grit, it takes toughness,” Ellington said after the game. “That’s what we showed all night long. We knew coming in here it wasn’t going to be easy.”

The Heat were already without the services of small forward Justise Winslow (wrist), shooting guard Dion Waiters (groin) and guard Josh Richardson (ankle), but they managed to show a ton of grit to pull out their seventh win of the season.

“Both teams put it out on the line,” said Heat head coach Erik Spoelstra after the game. “There weren’t possessions where either team was like ‘Oh, I didn’t think I went hard enough’ and then you had big players making big plays down the stretch.”

Up next, the Heat will conclude their road trip when they travel to play the Portland Trail Blazers (10-10) on Saturday night. The contest, which is scheduled to tip off shortly after 10 p.m. ET, will be broadcast live locally on Fox Sports Sun.
[xyz-ihs snippet=”Responsive-ImagenText”]