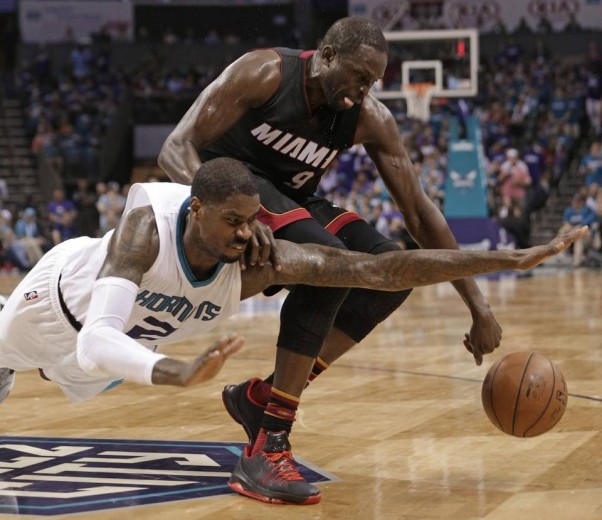 (Charlotte, NC) – A series of missed second-half opportunities by the Miami Heat served as key reasons why it fell, 89-85, to the Charlotte Hornets at Time Warner Cable Arena on Monday night, deadlocking the seven-game series at two games apiece.

Those opportunities each saw Miami trailing by just a point, the last time coming at 76-75 with 6:07 left in the game. Each attempt to re-take the lead was then stopped, sparking Charlotte to build its lead back up.

“Every time we were making a comeback, he (Kemba Walker) ended up hitting a couple of big baskets,” shooting guard Dwyane Wade said after the game.

Trailing 83-75 with just under five minutes left, the Heat made one final push that came up short. Consecutive baskets by Wade, the last with 1:57 left made it 87-84 in favor of Charlotte. Hassan Whiteside’s splitting of two free throws with 31.1 seconds to go then made it a two-point game. That would be as close as it got, as two Hornet free throws with 4.6 seconds left gave Charlotte its second straight win of the series.

“We still had opportunities to grind out the game, but they made the plays at the end,” Miami head coach Erik Spoelstra said.

Joe Johnson led the Heat with 16 points, followed by Luol Deng with 15 and both players grabbing seven rebounds. Wade and Goran Dragic were the only other Miami players to reach double figures, hitting for 12 apiece, with Wade’s 10 assists giving him a double-double to go with his seven boards.

“Tonight was one of those game where you feel you can get it done,” Wade commented. “But we didn’t do enough to get the job done.”

While the Heat defense played strong in stretches, they were unable to contain Walker, who ended the evening with 34 points. Walker and Jeremy Lin, who added 21 points, combined for more than 60 percent of the Charlotte scoring.

“Even as great as a night as he had, we had a chance to win it,” Spoelstra remarked.

“We’ve just got to watch out for him, because he likes to throw his arms into people.”

The opening quarter saw strong defense and solid ball movement combine to give Miami as much as an 11-point advantage. The Hornets hit just 32 percent of its shot attempts during the opening period and managed only a single assist.

The strong start by Miami faded completely in the second quarter as Charlotte outscored the Heat, 29-13, and held them to an absolutely miserable 3-of-19 on their shot attempts (16 percent). The Hornets also forced Miami into five turnovers and led 48-39 at the break.

“We’ve had two bad moments in the games here (in Charlotte) during the third quarter,” Wade said. “It’s tough to overcome that kind of play on the road.”

As noted by Wade, things didn’t change in the early moments of the third quarter when Charlotte ripped off the first nine points to take a 57-39 lead. However, the Heat ran off 17 unanswered points to start a 22-5 run, with Miami hitting all six of its shot attempts during the string of points, including a trio of three-pointers.

Whiteside was critical of the Hornet’s defensive strategies throughout the game:

In the final three minutes of the third period, Miami missed five shots in a row and committed two turnovers, allowing Charlotte to score the final seven points and take a 69-61 lead into the final quarter.

“This felt like old school Eastern Conference basketball,” Spoelstra commented. “This is what you can expect at this time of year.”

Wednesday night, the series moves back to Miami for a pivotal Game 5, with tipoff set for just after 8 p.m.
[xyz-ihs snippet=”Responsive-Ad”]