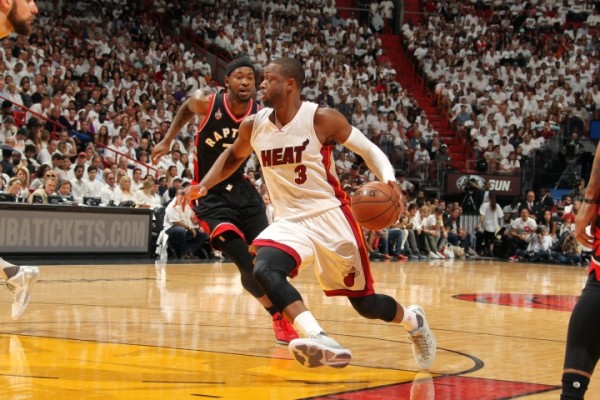 (Miami, FL) – With the series shifting to Florida for Game 3 of the Eastern Conference semifinals, the Miami Heat (1-2) engaged in yet another nail-biter with the Toronto Raptors (2-1) that unfortunately resulted in a 95-91 loss at American Airlines Arena on Saturday night.

Raptors standout point guard Kyle Lowry, who has come under fire lately for his lackluster play in the NBA Playoffs, shut a lot of his critics up when he went off in the second half of Game 3. Lowry opened eyes with a team-high 33 points (11-of-18 from the field, with 29 of his 33 points coming the second half), two assists and two rebounds.

“I’ve never lost faith in him,” said Raptors head coach Dwane Casey after the game. “I’ve said this: he’s struggled, but you don’t forget how to shoot and we needed that. We needed him to be Kyle, and he was Kyle tonight. Hopefully he sees the basket and the lid’s off of it, he can go to work and be himself.”

Even another seemingly vintage effort from Heat shooting guard Dwyane Wade wasn’t enough on the night, who finished with a game-high 38 points (13-of-25 from the floor, eight rebounds and four assists) in the loss. Wade, who hadn’t made a three-pointer before the 2016 NBA Playoffs since December 2015, was a whopping 4-of-6 from behind the arc.

With the Raptors up 25-19 and 10:54 remaining, the Heat suffered a major blow to center Hassan Whiteside when he exited the game with a sprained knee.

“Look, this is part of the mental grit during the playoffs,” said Heat head coach Erik Spoelstra after Game 3. “We don’t have to anticipate or assume anything. We’ll know more tomorrow.”

Miami trailed Toronto 49-40 at halftime and eventually led in the fourth quarter by six points, but simply could not stop Lowry from taking over the game.

Heat point guard Goran Dragic, who’s been on fire during the playoffs and living up to the $85 million contract he signed last offseason, finished with 12 points and three rebounds.

Although they only had three guys score in double figures on Saturday night, the Raptors got the job done on the road. Two-time All-Star shooting guard DeMar DeRozan backed Lowry up with his 19 points, six boards and five assists, while center Jonas Valanciunas had 16 points and 12 rebounds before exiting in the second half with an ankle injury.

Up next, the Heat will look to tie the series up in Game 4 on Monday night at American Airlines Arena. The contest, which is scheduled to start shortly after 8:00 pm ET, will be broadcast nationally on TNT.
[xyz-ihs snippet=”Responsive-Ad”]