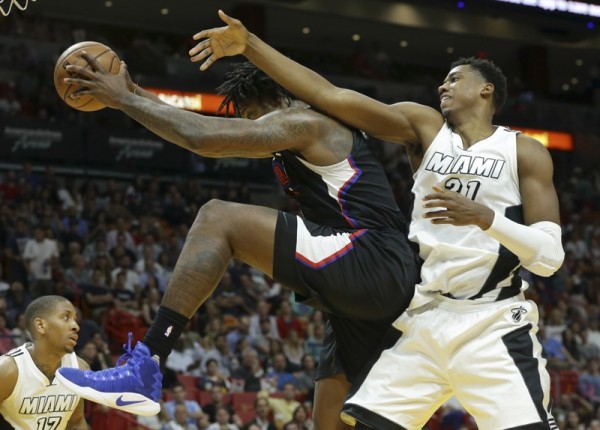 (Miami, FL) – A desperate rally in the final 16 seconds came up short as the Miami Heat fell to the visiting Los Angeles Clippers by a 102-98 score at American Airlines Arena on Friday night.

Trailing 99-93 with 16.2 seconds remaining, the Heat’s Josh Richardson converted a 3-point play to slice the margin in half. Then, a turnover by Los Angeles’ Austin Rivers gave Miami a chance to tie the game, but a quick foul resulted in two free throws from Goran Dragic to chop the margin to 99-98 with 10.5 seconds left.

The Clippers’ Chris Paul was then fouled and made the first of two free throws. His second attempt missed, but DeAndre Jordan’s rebound and layup with 7.7 seconds left ended the comeback hopes.

“We had a 3-point play designed, because I figured Chris Paul was going to knock down both of those shots,” Heat head coach Erik Spoelstra said. “Even if he doesn’t, I’m figuring we can get one rebound. If I knew what I know now, I would’ve probably had Hassan in the game.”

Earlier in the quarter, the Heat had trailed by 12 with seven minutes left in the game and still faced a seven-point deficit with 50.7 seconds left. Miami was able to reduce it to four on a Justise Winslow 3-pointer with 22 seconds left, setting the stage for the exciting closing seconds.

“That was a terrific second half, but against a championship-caliber team, you obviously have to play 48 minutes of basketball,” Spoelstra said. “We were unable to put that together during the first half and we had some chances during the forth quarter. That’s tough.”

Six different Heat players scored in double figures, led by Dragic’s double-double of 21 points and 11 assists, followed by Winslow with 15 and Wayne Ellington with 13. James Johnson ended the night with 12, while the duo of Hassan Whiteside and Josh McRoberts each contributed 12. Whiteside’s 17 boards gave him yet another double-double.

Cold spells in the second and third quarters were especially costly to Miami’s cause, beginning with just 24 percent shooting in the second quarter. Those two stretches served as momentum-killers that ended their two-game winning streak and dropped them to 9-18 on the year.

Winslow scored on a layup just eight seconds into the second quarter, but then the Heat went into deep a freeze over the remainder of the period. That allowed the Clippers to go on a 23-9 run, taking a pair of 16-point leads before heading to halftime with a 60-46 lead.

“It looked like we were a little bit flat, sluggish during the first half,” Spoelstra said. “We weren’t dictating or imposing any kind of will on the game. We got more into the competitive aspect of the game in the second half.”

Miami then began the third quarter with a hot hand, hitting five of its first six shots to cut a 14-point halftime deficit down to just six with 9:06 left in the third period. However, that was as close as they got the rest of the period as they only shot 22 percent from the field over that stretch. Still, they entered the final quarter only trailing by 10 at 79-69, primarily because Los Angeles managed to make just 35 percent of their shots during the period.

The Heat continue their lengthy homestand on Sunday with a clash against the Boston Celtics, with tipoff set for just after 6 p.m. ET.
[xyz-ihs snippet=”Responsive-ImagenText”]