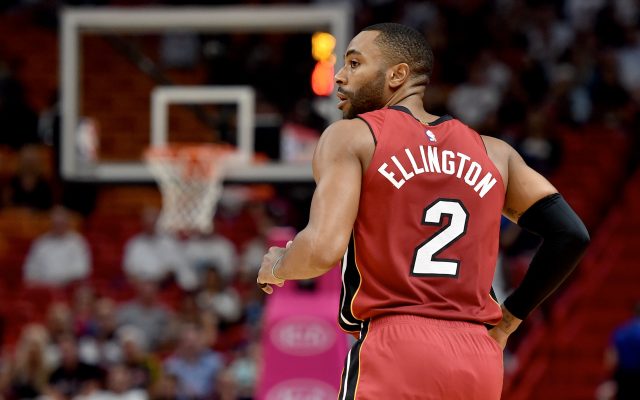 The NBA trade deadline is fast approaching and according to Barry Jackson of the Miami Herald, Wayne Ellington’s agent has met with Miami Heat officials regarding the veteran shooting guard’s future.

“The agent for Heat guard Wayne Ellington has had conversations with Heat officials regarding his limited role and his future with the team, two people briefed on the conversations said this week,” Jackson wrote.

“According to a team source, the Heat is aware that Ellington wants to play. But the Heat conveyed to Ellington’s camp that it values Ellington and no promises were made.”

Ellington is a talented sharpshooter, but at the moment he is barely scratching Miami’s rotation, which is loaded at the shooting guard position. While he averaged as many as 26.1 minutes per game in the month of November, his usage has steadily declined, and so far in the new year, Ellington has played a total of eight minutes. All eight of those minutes came in Miami’s blowout loss to the Milwaukee Bucks.

According to Jackson, Ellington has not yet ruled out requesting a trade from the Heat.

“Ellington told the Miami Herald previously that he would not rule out going to Heat management and asking to trade him to a team where he can play more,” he wrote. “Ellington, signed to a one-year, $6.3 million contract, has the right to approve any trade.”

For Ellington, he’s readily admitted that he has had a tough time accepting his new role, or lack thereof, on the Heat roster.

“It’s been really hard,” Ellington reiterated to The Athletic this week, echoing previous comments on the matter. “I’ve felt all different types of emotions: hurt, anger, all the way down the line. Upset. All that kind of stuff. I’m a warrior, though. I’m going to keep on fighting… You can keep on saying [it’s a long season], but, [expletive], we’re halfway through.”

It would be interesting to see what Ellington could potentially net in a trade. Last season, Ellington set an NBA record for most 3-pointers by a reserve player with 227. That kind of shooting ability from deep is certainly coveted around the league, and it stands to reason that teams such as the Philadelphia 76ers and Los Angeles Lakers, who both have playoff aspirations, but lack consistent scoring from outside, could make a move for Ellington.

That all remains to be seen. If the Heat do want something in return for Ellington though, they’ll have to move quickly.
[xyz-ihs snippet=”HN-300×250-TextnImage”]