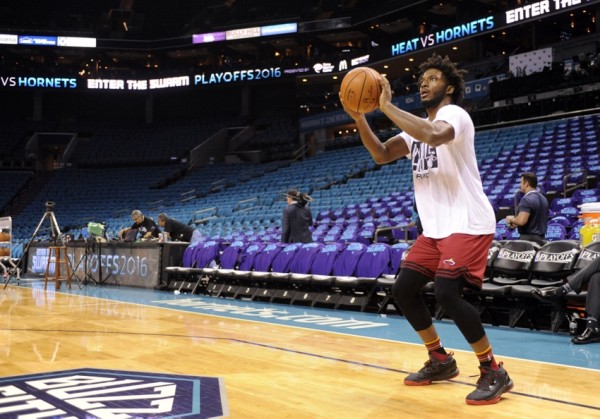 Despite concerns that a sophomore jinx could be the reason for his slow start, Miami Heat swingman Justise Winslow is confident that the effort he put in during the offseason to improve his shooting touch will eventually pay off.

Barry Jackson of the Miami Herald recently broke down where Winslow’s shots are coming from on the court, noting that just 33.8 percent (26 of 77) of them have gone in the hoop during the Heat’s first five games. Here are the numbers:

The subject became fodder for further conversation after Winslow’s rough night in Toronto on Friday. In that game, he connected on just five of his 18 field goal attempts and missed on his first seven shots.

“All the shots are on line,” Winslow said. “I’m shooting them with confidence and think every shot is going. I threw up some crazy ones in the paint, thought I got fouled.”

The frustrating part for Winslow is that he had worked with Rob Fodor, Miami’s shooting coach, all during the summer. Most of that work went into improving the mechanics of his shooting.

“It’s a small sample size, but I know what I need to work on: obviously, three-point shooting,” Winslow said. “I see the opportunity that I have. I think I have shown glimpses of what I’m capable of.”

“In my head, I think the last shot (I took) went in, so that’s just how I’m going out there and playing, playing with a bunch of confidence,” Winslow said. “It looks bad after the game, looking at 5 for 18. But they’re all shots I know I can make, and all on line, on target. I don’t want to be too hard on myself.”

The fact that Winslow possesses a strong work ethic and commitment to improve offers confidence that this is simply a slow start. One of the off-court ways that he’s tried is by watching videos of other shooters like Kyrie Irving of Cleveland and Klay Thompson of Golden State.

“I saw a move Kyrie did and recorded it on my phone and put it in slow motion. I wanted to look at the footwork. I brought it up here [to AmericanAirlines Arena],” Winslow said. “A couple of the coaches looked at and it was like a Eurostep. I texted it to Kyrie, too. Any move that I think is unique or I think I could do or implement in my game right away, I try to watch film and try to do it.”

Thompson’s shot was looked at as a way of Winslow improving his ability from long-range.

“His shot looks the same every time. That registered with me and something I’ve been trying to do with my elbow or wrist, shoot the exact way, land on balance each shot,” Winslow said.

There are plenty of other players, both current and retired, that Winslow also has checked out on video.

Winslow is still only 20-years-old and he should be afforded the time to improve as the season moves ahead.
[xyz-ihs snippet=”Responsive-ImagenText”]