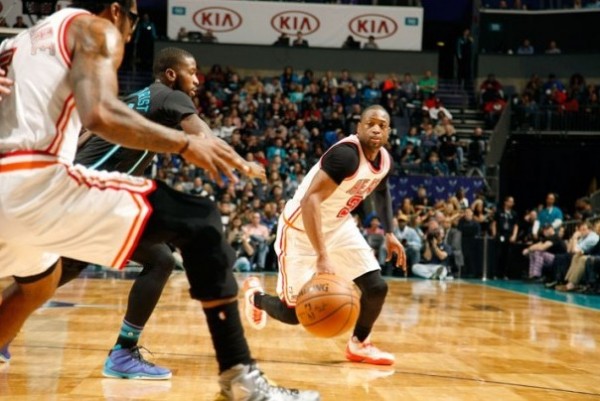 (Charlotte, NC) – In yet another thrilling game, the Miami Heat (29-22) concluded an exhausting stretch of 14 of their last 16 games on the road with a 98-95 come-from-behind victory over the Charlotte Hornets (24-26) on Friday night at Time Warner Cable Arena.

The victory came on a night where the Heat went a dismal 0-of-9 from beyond the arc, but they got the job done in enemy territory.

“It was a much better response to who we want to be on the road,” said Heat head coach Erik Spoelstra. “Coaches love these kind of games. Our confidence was in our feeling that we could get stops on the other end. That has to be who we become every single night.”

Heat center Hassan Whiteside notched a triple-double with 10 points, 10 rebounds and a whopping 10 blocked shots in just 27 minutes off the bench.

“My teammates did a great job of just coaching me all the way,” said Whiteside. “We changed the offense, came in here and got a win in my hometown.”

Whiteside accomplished the extraordinary feat for the third time this season.

“They ain’t doin’ it with blocks, that’s all I’ve got to say,” added Whiteside.

Being down by as many as eight points early in the fourth quarter, Wade and company stormed back down the stretch. The 12-time All-Star guard made a very clutch play down the stretch, as Wade stole the ball from Hornets point guard Kemba Walker (20 points, six assists and five rebounds) in the closing seconds to put the game on ice.

With only 23 seconds left in the final frame, power forward Chris Bosh drove to the basket for an and-one layup that turned out to be the game-winning score for Miami.

Point guard Goran Dragic almost had himself a triple-double as well with 12 points, nine assists, eight boards and two steals.

For the Hornets, power forward Marvin Williams (12-of-17 from the field) scored a season-high 27 points and four rebounds in the loss, while shooting guard Nicholas Batum had 21 points, seven assists, six boards and three blocks.

Up next, the Heat will head home to American Airlines Arena and take on the red-hot Los Angeles Clippers (33-17) on Super Bowl Sunday. The contest, which is scheduled to tip off shortly after 2:00 pm ET, will be broadcast live nationally on ABC.
[xyz-ihs snippet=”Responsive-Ad”]