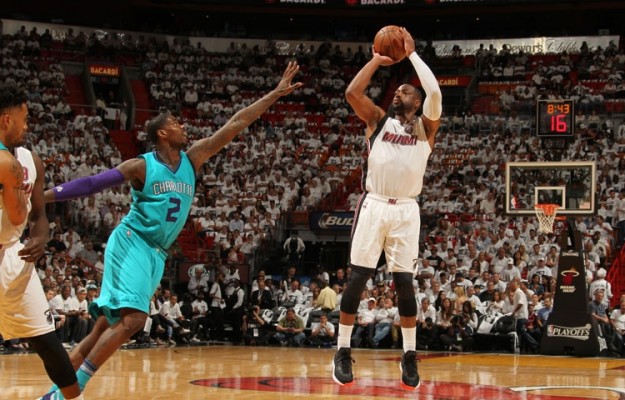 (Miami, FL) — After having one of the best games in franchise history, the Miami Heat continued its dominance over the Charlotte Hornets with a 115-103 win Wednesday night to take a commanding 2-0 series lead. It didn’t come as easy as the 123-91 blowout that took place Sunday but it did show a consistent, assertive Heat team.

Contrary to the blowout during Game 1, both teams came out with a competitive edge and battled evenly for the entire first quarter. Hassan Whiteside, who had 21 points and 11 rebounds in his first career playoff game, struggled early on with foul trouble and keeping up with Al Jefferson. The Hornets’ old-school center went on a tear in the second quarter, schooling Whiteside and the Heat for 16 points in the period.

“They try to get me in foul trouble. They seen I had two early fouls, they try to get me a third one,” Whiteside said after picking up two fouls in the game’s first seven minutes. “Coach just told me to keep rolling, making them crash on big, get shooters open. You know they started collapsing on me and we expected that. I knew there wasn’t going to be a lot of lobs today but just drew a lot of attention”

Perhaps the most encouraging thing to see was how Whiteside responded to the early adversity. The 7-footer was a little stressed out but didn’t allow it to alter his game. Instead, using the challenge as fuel to answer back with a winning performance, he put up a hot 15 points by halftime.

“He’s making progress. We love it. He made some big plays tonight. He was able to manage it.”

Even though Whiteside made his way, the Hornets found ways to get their guys going as well. Just like the Heat had predicted, Charlotte came out with a much more determined demeanor as its stars took over. But it was the Heat who was able to steal the spotlight and cover the star play with teamwork.

“What we expected was a big response from them. Our guys were able to be really aggressive, able to knock down some shots and the pace was better than it was in the first game.” Spoelstra said.

Not only was Miami able to withstand the 16-point outburst by Jefferson and 21-point half from Kemba Walker but they were able to counter soundly on offense. The Heat outdid their 41-point first quarter Sunday by putting up a whopping 43 points in the second quarter on their way to 72 in the half, both a Heat playoff record for any quarter and any half respectively. Both Dwyane Wade and Whiteside led the charge with 15 points.

Miami wouldn’t come out sizzling in the second half but it sure did find ways to score, even if it came from the most unlikely of sources. Rookie Josh Richardson propelled the Heat in the third quarter, scoring eight of the team’s 19 points. The second-round draft pick also had a spectacular night on the defensive side, limiting Walker to just two points in the third period.

While Charlotte rallied in the fourth, getting to as close as seven, Wade and the Heat were able to maintain their rhythm and cease all thoughts of a letdown. The Heat’s primary closer scored nine points in the game’s final five minutes on a series of a clutch jumpers, including one that actually got the former finals MVP and Courtney Lee trash-talking.

The Heat turned up the notch on defense in the last couple minutes of the game, forcing a couple blocks, steals and a shot-clock violation. The final result: a convincing 115-103 victory.

Wade, who scored 20+ points for the 100th time in the playoffs, led the Heat with 28 points and eight assists. Whiteside got his second consecutive double-double with 17 points and 13 boards on a perfect 8-of-8 shooting. Goran Dragic and Luol Deng chipped in 18 and 16 points, respectively, and Richardson contributed 15 off the bench.

For Charlotte, Walker led all scorers with 29 points and five rebounds. Jefferson, who could move into the starting lineup in Game 3, had a huge game with 25 points and seven rebounds on 12-of-17 shooting. Apart from those two guys, the Hornets got very little help elsewhere. Marvin Williams had an abysmal six points on 0-of-10 shooting and Nicolas Batum provided nine points and seven rebounds but left the game early due to ankle injury.

The series will turn to Charlotte as the Heat take on the Hornets at Time Warner Cable Arena. Game 3 will take place at 5:30 p.m. E.T. on TNT.
[xyz-ihs snippet=”Responsive-Ad”]