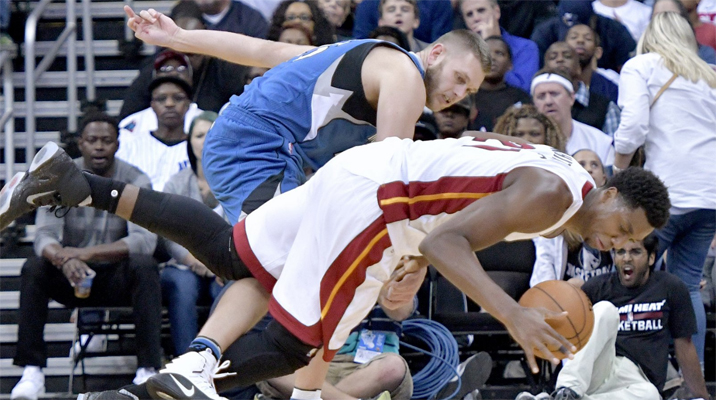 (Kansas City, MO) – After leading by as many as 19 points in the third quarter, the Miami Heat (1-1) could not keep up with their opponent in the second half as they fell 109-100 to the Minnesota Timberwolves (1-0) on Saturday night at Sprint Center.

Miami was again led on both ends of the court by rising star center Hassan Whiteside, who put together a stellar performance en route to a double-double with 17 points (7-of-10 shots made from the field), 12 rebounds and three blocked shots in 27 minutes of action.

Towns led all scorers with 20 points, 10 boards and two blocks, while Wiggins had 19 points (3-of-11 from the field and 13-of-16 from the charity stripe), two boards and one block.

For Heat head coach Erik Spoelstra, he was very glad to see new Timberwolves head coach Tom Thibodeau back coaching in the NBA.

“He’s too good of a coach not to be,” Spoelstra said. “He did a tremendous job with the Chicago Bulls and things happen that you can’t control. So I’m happy for him that he’s able to get back in. This is an exciting group to build around.”

Up next, the Heat are scheduled to host the Brooklyn Nets in their first home preseason game on Tuesday night at American Airlines Arena. The contest, which is scheduled to tip off shortly after 7:30 pm ET, will be broadcast live locally on Fox Sports Sun.
[xyz-ihs snippet=”Responsive-ImagenText”]