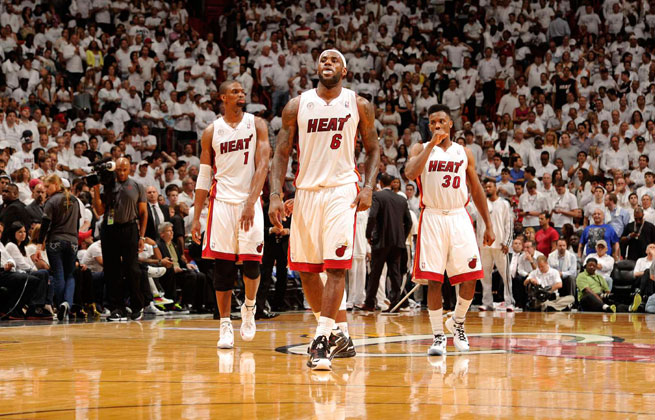 (Miami, FL) — “You make it this far and you don’t want anything to stop you,” Chris Bosh said.

After pulling out an 87-83 victory on the heels of a fourth quarter comeback in game two, the Heat return home for two games against the Indiana Pacers.

In the “Big Three” era prior to this season, Miami has won game two each of the four times that they dropped game one in a playoff series. They also happened to win the series each time as well. After winning game two on Tuesday to even the series at a game apiece, the Heat have a chance to take the series lead and make Indiana its fifth victim in this scenario.

Returning to South Beach, the Heat can rely on its fans in the American Airlines Arena for an added edge over its competition.

“I know there is a guy that sits court side, he always tries to get into my head,” Lance Stephenson said about the Miami crowd. “I got to block him out, stay focused and stay with my team.”

To compound the Pacers challenges of winning in South Beach, Indiana’s leading scorer Paul George is questionable for game three after suffering a concussion caused from a fourth quarter collision with Dwyane Wade in game two. The NBA concussion protocol states that a player must be symptom free for 24 hours before they can be cleared to play. Although his status is uncertain, it is expected that an impact player of George’s caliber would find a way to tough it out and play in game three.

“Hopefully he’s good to go because we are going to need him,” Indiana guard Lance Stephenson said about George.

With or without George, the Pacers will need another stellar performance from Stephenson. In game two, Stephenson scored a game-high 25 points and was aggressive in getting into the heart of the Heat’s interior defense.

For Miami, it will need to mimic the same defensive prowess it executed in game two in order to further its success in game three. Look for another heavy dose of Udonis Haslem in the rotation for his size and defensive matchup against David West.

“We need all of our guys to be able to produce in those big muscle areas,” Heat Head Coach Spoelstra said.

The All-Star duo of James and Wade continues to shine for the Heat.

James scored 12 of his 22 points in the fourth quarter of game two and willed Miami to a crucial victory. He has been able to use his size advantage over George, weight wise at least, to force his way to the basket and find his open teammates when the defense collapses on him. James will need to continue to shoulder the load for the Heat, specifically late in the game, in order to come out victorious.

“We have played some great basketball in winning time,” James said about Miami’s fourth quarter efforts. “That’s what it’s about, when the game gets close, can we produce enough plays both offensively and defensively in order to come through and we have been able to do that.”

Wade, who came into the series hampering an injured hand, has averaged 25 points per game thus far and will need to continue to score near the same mark to alleviate the pressure placed on James.

“He’s playing some of the best basketball he has played in the last couple of years,” James said about Wade.

With the shaky play of Chris Bosh, the Heat have turned to a more physical presence in Chris Andersen to combat with the size of Roy Hibbert.

“We need his energy, his toughness, his rebounding, his defense,” Erik Spoelstra said about Andersen. “This is a big muscle series, so we need what he brings to the table.”

Through the first two games, Andersen has found a way to deliver offensively as well as on the boards, two desperate needs for Miami. In game one Andersen led all players not named James or Wade with 14 points off of the bench. In game two, he grabbed a team-high 12 rebounds and limited Roy Hibbert to just 12 points. Expect the same tenacity and effort that is accustomed from the “Birdman” on Saturday.

Collectively, the Heat know what needs to be accomplished in order to take care of business and keep the home court advantage in game three.

“We have to protect our home but we can’t go out there saying just because we are back home that we are going to get an automatic win; we have to play,” James said.

Game Three is Saturday at 8:30 PM ET at the American Airlines Arena.