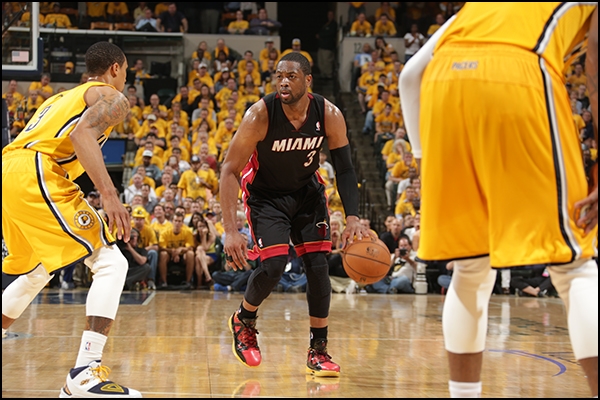 (Indianapolis, IN) — LeBron James drove right and found Dwyane Wade for the open slam dunk with 21.6 seconds left. The basket gave the Miami Heat an eight point lead and slammed the door on any chance for an Indiana Pacer comeback.

After losing game one, the Heat came into game two of the Eastern Conference Finals focused on defense and needing to return to South Beach tied 1-1. Miami did just that, winning game two 87-83, in a hard fought game that saw 21 lead changes.

“It’s not going to be pretty, not in the Eastern Conference,” James said. “It’s about who can go on runs, who can get defensive stops and who doesn’t turn the ball over.”

Miami found great success with the combination of Shane Battier and James covering Paul George. The Heat duo limited George’s offensive dominance, making just 4-of-16 shots. After scoring 24 in game one, George scored 14 points in game two and was not effective down the stretch of the final minutes.

“Tough loss; you have to credit Miami with making more plays down the stretch,” Indiana Head Coach Frank Vogel said.

The Pacers were in need of an offensive contribution from the void left by George.

Stephenson had his way with the Heat defense, finding ways to get open and driving into the paint at will.  Stephenson finished with a game-high 25 points and also dished out seven assists.

“He was really hurting us getting into the paint and putting pressure on our defense,” Miami Head Coach Erik Spoelstra said about Stephenson.

After giving up an uncharacteristic 55 points in the first half of game one, the Heat anchored down defensively, surrendering just 37 first half points in game two. After leading 41-37 at halftime, the Heat were unable to find an answer for Stephenson and trailed by one at 63-62 going into the fourth quarter. Midway through the fourth quarter, Miami scored 10 straight points after trailing 75-72 and never looked back.

“He is going to try and take over the game; we know that,” Vogel said about what James would do going into the fourth quarter.

As any four-time regular season MVP would do, James took matters into his own hands in the fourth quarter. Finding ways to beat the Pacers stingy defense off of the drive, James put his head down, lowered his broad shoulders and drove to the basket time and time again. James scored 12 of his 22 points in the fourth quarter, while also having six assists, seven rebounds and three blocks in an all-around effort.

“We know that they are great players,” Vogel said. “They are a great team, they are the champs and that’s what we expect from them.”

Continuing his aggressive play from game one, Wade scored eight of Miami’s first 10 points of the game, also scoring 10 in the fourth quarter and finished with a team-high 23 points in a back-and-forth clash with Stephenson.

“That’s a great battle going both ways, Dwyane has always been one of the best dynamic two-way players on both ends,” Spoelstra said.

In desperate need of bench scoring, third year point guard Norris Cole stepped up for Miami. Cole, who was held scoreless in game one, led all players not named James or Wade with 11 points.

After the failed experiment of starting Battier, Spoelstra started Udonis Haslem in his place. Haslem drew the defensive assignment of containing David West in the paint, and contain he did. West, who finished with 10 points, was unable to get the same low post positioning he was accustomed to in game one, where he scored 19 points. Miami’s defensive adjustments consisted of trapping the ball on pick-and-rolls, rotating help defense to the open shooters and keeping active hands in the passing lanes.  Miami had seven steals and six blocks while holding Indiana to just 40-percent shooting.

“You have to have great mental stability,” Spoelstra said. “You have to keep staying with it.”

The Heat can breathe a sigh of relief that the series is now even with the next two games to be played in Miami, starting with game three Saturday night. Expect another battle of epic proportions with the American Airlines crowd amped up for the battle of Eastern Conference supremacy.

“We are never satisfied until we close out the series,” James said.