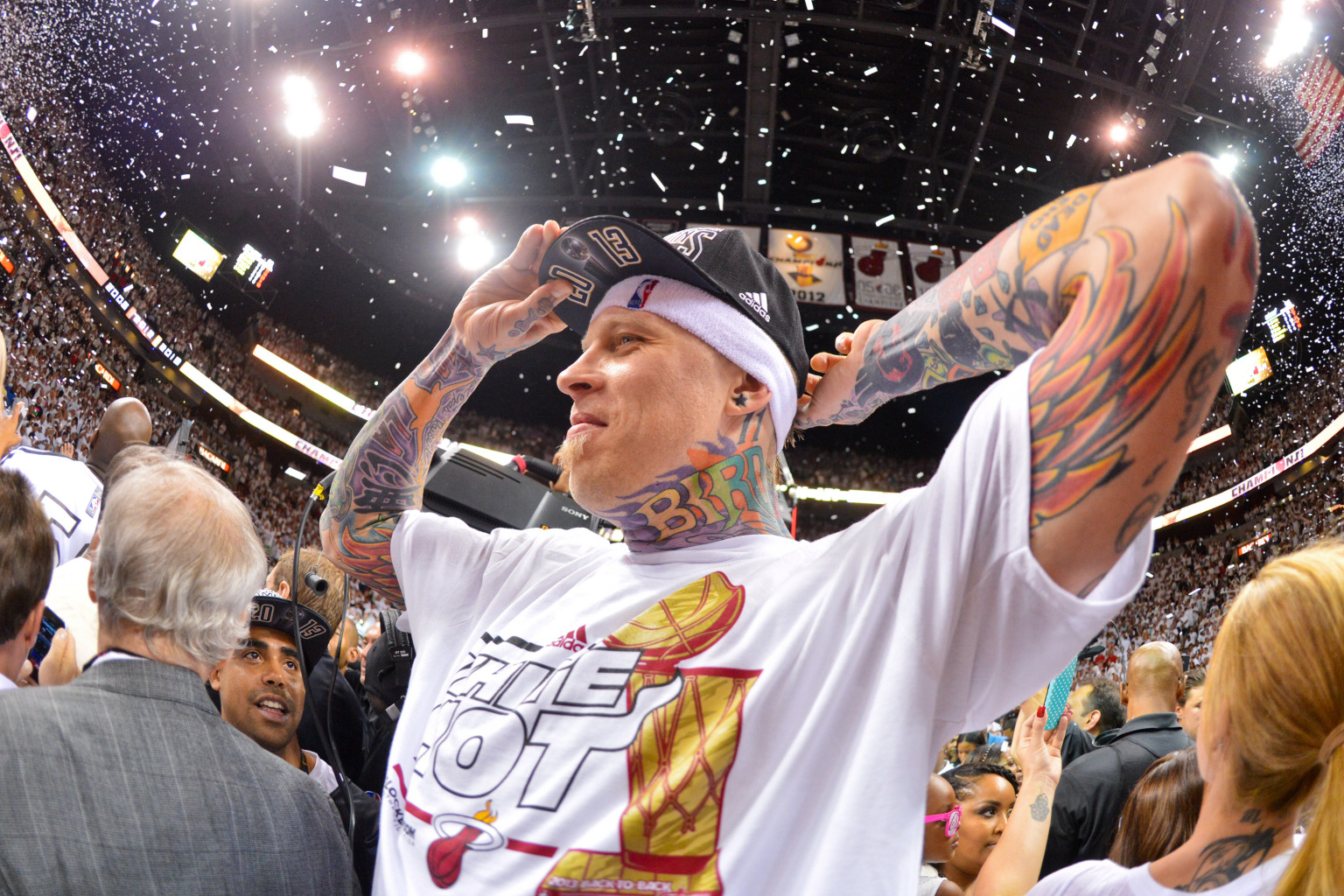 To say that Chris “Birdman” Andersen’s path to becoming an NBA champion with the Heat was tumultuous could perhaps be the biggest understatement ever made about a professional basketball player. Andersen has always been viewed as an out of the box guy, but his mistakes and the lessons he’s learned along the way have helped form him into a key contributor for the defending NBA champs.

Andersen was born on July 7, 1978 in Long Beach, California where his mother worked as a waitress at a naval base and his father was a corrections officer. His family moved to Texas when he was four, and their financial situation was anything but stable. Things got so bad, in fact, that Andersen was sent to live in a group home for three years when he was in middle school.

“I had the opportunity to either live in a military school or at a children’s home,” he says about the experience, “and I’m just thankful that I actually got the choice to pick one of the two. I picked the children’s home.”

By the time he got to high school, Andersen was tall and athletic, and the varsity coach convinced him to try his hand at basketball. Andersen obliged, knowing that basketball could potentially afford him a scholarship and an opportunity to pursue his dreams beyond any level his family could provide. He missed out on an opportunity to play basketball at the University of Houston due to poor grades, but accepted an offer to continue playing ball at a junior college in Brenham, Texas by the name of Blinn College.

It wasn’t long before Andersen realized that the college life was not for him, and in 1999, after one year at Blinn, he dropped out of school and decided to pursue a professional basketball career. This marked the first time Andersen’s failure to comply with the rules separated him from his goals, as he failed to officially apply for the NBA draft and missed out on an opportunity to get drafted. He spent the next two seasons bouncing from one semi-pro team to another, spending time in China, Texas, New Mexico and Fargo, North Dakota.

His hard work paid off in 2001, when he became the #1 overall pick in the NBA Development League draft. Andersen played just two games for the Fayetteville Patriots before he got promoted to the NBA’s Denver Nuggets in November of 2001, becoming the first player ever to get called up from the D-League to the NBA. It was in Denver where the nickname “Birdman” first emerged, a play off of his freakishly large wingspan and his energetic, acrobatic nature. 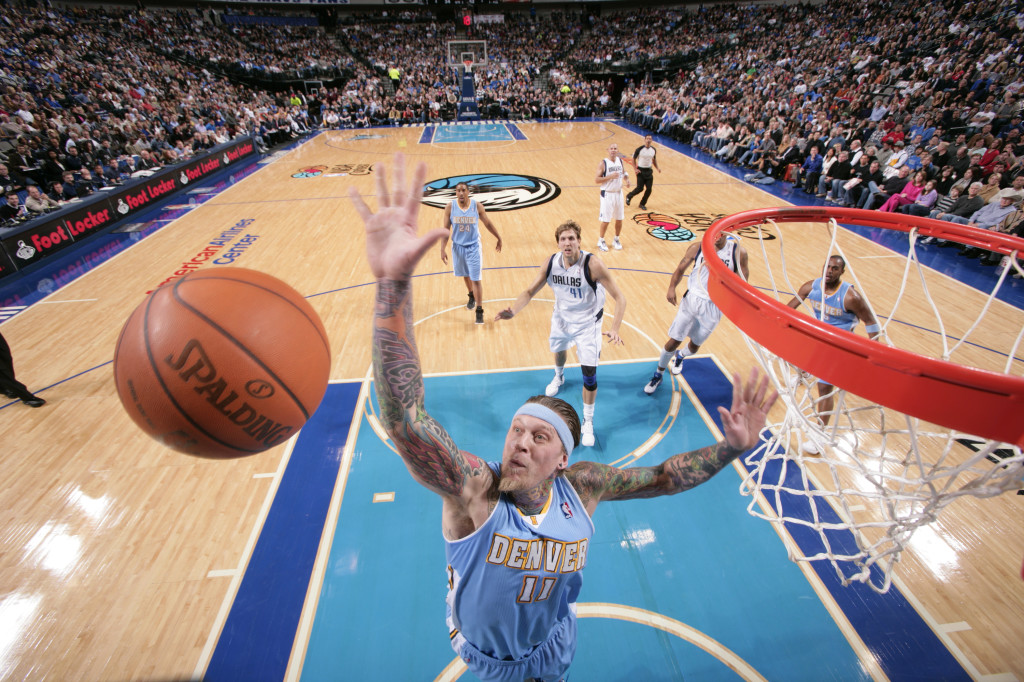 (Photo Courtesy of Glenn James) “Chris Andersen spent 3 seasons with the Nuggets and quickly gained a reputation as one of the hardest workers and fiercest big men in the league (and the guy with the crazy hair and tattoos).”

The Birdman spent 3 seasons with the Nuggets and quickly gained a reputation as one of the hardest workers and fiercest big men in the league (and the guy with the crazy hair and tattoos). His hard work paid off, literally, in the summer of 2004, when Andersen signed a four year, $14 million deal with the New Orleans Hornets. But all was not perfect in his world, and he soon found himself abusing drugs and alcohol.

Andersen had a falling out with his mother over money, was no longer speaking to his father and went through an ugly breakup with his fiancé. Shortly afterward, in August of 2005, his home was ravaged by Hurricane Katrina, leaving him feeling alone and depressed.

As is so often the case with a rags-to-riches story such as his, money only exacerbated the issues in Andersen’s life, and just 32 games into his second season in New Orleans, Andersen found himself suspended indefinitely from the NBA after testing positive for a banned substance.

Andersen took the suspension extremely hard, saying “The darkest point was knowing that I messed up that bad. As a child growing up, your dream is to be a professional athlete and [I] just destroyed that.”

Andersen’s positive test came under the NBA’s “drugs of abuse” category, which gave the NBA the authority to expel him from the league and the Players Union, even without any previous drug-related incidents. Though he has continually declined to specify which drugs landed him out of the league, Andersen has remained adamant that he won’t let anything like that happen again.

Andersen took the suspension as a sign that he needed to get his life back on track, and took full advantage of the opportunity, checking himself into a rehab facility and working towards his reinstatement, all while submitting to weekly drug tests.

“I wanted to be the one that said ‘I told you so,'” Andersen said, “I didn’t want to be in a position where people were saying ‘I told you so.'”

In March of ’08, his commitment to staying clean and improving his life paid off, and Andersen was reinstated as an NBA player. He played out the remaining season with the Hornets, then decided to head back to the place where it all began for him, signing with the Denver Nuggets in the offseason.

“I had no desire to go back down that road,” he said “I did want to come back and make a statement… [I wanted to say] look at me now.”

And make a statement he did, appearing in 147 games for the Nuggets over the next two seasons. In Denver, he found comfort in a new circle of friends and the unwavering support of the organization, including Coach George Karl.

“I’m not an expert on the rehab of drugs and his situation,” Karl said, “but I would have bet on Chris Andersen.”

So Chris Andersen overcame a rough childhood, dropped out of college and worked his way up the ladder, fulfilling his dream of playing in the NBA. He hit rock bottom, got kicked out of the league, got his life back together and redeemed himself as someone worthy of his teammates’ trust and worthy of a roster spot. He headed back to his newfound home and everyone lives happily ever after, right?

Nope, for Andersen, the story had only just begun, and this is where it became really interesting.

After remaining clean and staying out of trouble for 4 years in Denver, Andersen unexpectedly missed a playoff game against the Lakers in April of 2012. The explanation shocked everyone, including Andersen.

Sherriff’s Deputies had searched Andersen’s home in conjunction with an investigation by their “Internet Crimes Against Children” unit.

A female fan in 2010 mailed Mr. Andersen multiple letters and included several photos in which she was scantily clad. Chris and this woman communicated with each other and in 2011, this woman, who represented herself as 21 years of age, flew to Colorado, showing her required identification. After leaving Colorado, she became upset at his lack of interest. In 2012, she threatened to retaliate if he did not provide financial remuneration. … Mr. Andersen has been fully cooperative with the authorities.

Despite his denial of any guilt, this did not look good for the Birdman, and just a few months later, in July of 2012, he was cut by the Nuggets. Because of the legal implications of the investigation, Andersen wasn’t even able to speak out and defend himself, and had to sit idly by while the media took the story and ran with it. Many feared that he would fall back into his old habits without basketball in his life, but instead he remained focused on staying in shape and helping the authorities find all the facts about the situation.

Andersen remained out of work until January of 2013, when the Miami Heat decided to take a chance on the Birdman, signing him to a 10-day contract. Miami was desperate to add size inside in order to be able to match up with Indiana, and Andersen brought that and more to the Heat lineup. Shortly after signing the deal, Andersen said “I’m here to take care of business. I want to get out there, I want to play, I want to help provide another championship for Miami.”

Andersen parlayed his 10-day contract into a full-time roster spot and wound up playing a much bigger role down the stretch than anyone could’ve imagined. Andersen averaged just over 15 minutes a game in the 2013 Playoffs and shot over 80 percent from the field, making 46 of the 57 shots he attempted.

Andersen also became an emotional leader for the Heat, bringing an intensity and fire to the lineup that Miami urgently needed. The Birdman’s impact on the Heat can’t be overstated, as Miami went 39-3 in the games that he appeared in during the 2012-13 season. That mark is the highest winning percentage ever recorded by one player in NBA history (min. 40 games). Team President Pat Riley said after the Heat re-signed Andersen this offsesason “We would not have won the championship without him and we are looking forward to him having an even better season next year.”

And the Birdman has done exactly that, recording some of the best statistical totals of his 12-year career. Andersen has been through a lot, and has morphed from an immature, sometimes explosive character into a level-headed, hard-working leader. Through five games this postseason, Andersen is averaging 7 points and 5.4 rebounds per game while still bringing his signature charisma to the game.

Chris Andersen is a guy who can truly understand how much of a privilege it is to play basketball for a living and he won’t let himself take a single game or a single moment for granted. After all he’s been through, it’s a surprise that more people aren’t applauding the Birdman for even being in this situation, let alone owning the moment like he has the past two years in Miami. The Heat will continue to depend on Andersen to log meaningful minutes up the middle, and you can expect to see his role increase if the Heat beat the Nets and earn a fourth consecutive Eastern Conference Finals berth.

Whether it’s Indiana or Washington who comes out of the other semifinal series, Miami will need strong play on the interior from Andersen if they hope to get back to the NBA Finals. I can’t wait to see what kind of unexpected impact the Birdman will make this year.

Catch Game Two of the Brooklyn/Miami series Thursday, May 8 at 7pm EST on ESPN2.