Don't Miss
Home / Rumors / Miami Heat Rumor: Will This Be the End of the “Big Three” in Miami?

Miami Heat Rumor: Will This Be the End of the “Big Three” in Miami? 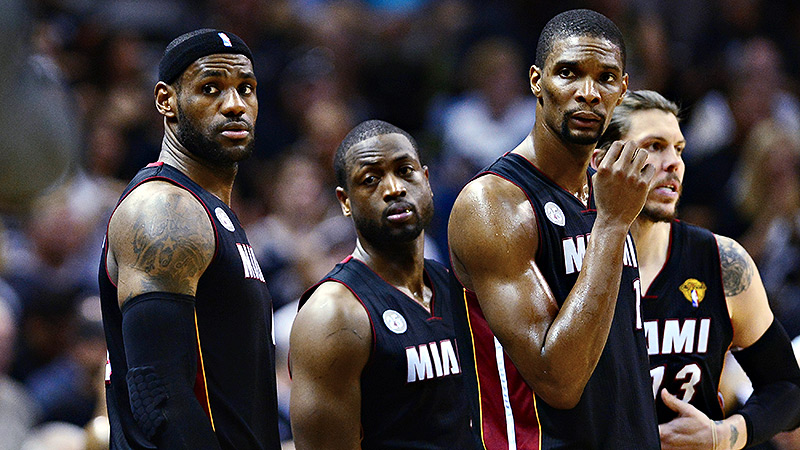 “Not five, not six, not seven…” The infamous quote from LeBron James when he arrived in South Beach in 2010, made it clear that he joined forces with Dwyane Wade and Chris Bosh to win championships.

After adding two NBA Championships to his already cluttered trophy case, James is still hungry to three-peat as champion in 2014.

“We’ve seen the promise land two times,” James said. “The fulfillment you get out of it re-energizes you.”

In sports, the word dynasty is thrown around quite frivolously by those in the media; however, winning multiple championships in a short span propels you into that conversation.

Many of the NBA greats: Magic, Bird, Jordan, Kobe all won multiple championships, solidifying their legacy. The ability to stay focused and keep the hunger to win it all yet again is the litmus test of a true champion.

“LeBron James will win more championships,” Magic Johnson said. “LeBron is special, he makes his teammates better; he plays just like me.”

In the “Big Three” era, Chris Bosh has been casted as the third option despite averaging 17.4 points and 7.4 rebounds per game over his four year stint, all of which have diminished each year. It would not be shocking to see Bosh leave Miami after this season in order to join a young team on the cusp on perennial playoff contention, in need of a stretch forward like the Phoenix Suns or Washington Wizards. 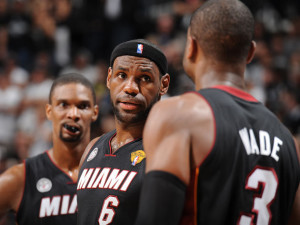 (Photo Courtesy of Getty Images) “With the conclusion of the 2014 NBA playoffs, James and his cohorts, Wade and Bosh, have player options to opt out of their contract and leave the Miami Heat.”

“It’s easy when you say in the summertime lets team up,” James said. “If we could look back on it, I’m surprised we even got to the finals in 2011.”

With the conclusion of the 2014 NBA playoffs, James and his cohorts, Wade and Bosh, have player options to opt out of their contract and leave the Miami Heat.

Wade is already a three-time champion, but with his surmounting injuries, specifically to his knees and being 32-years-old, he seems to be diminishing in his longevity at an elite level in the league.

“I think we all owe it to each other to have the same kind of talk as we had when we first teamed up,” Wade said. “Obviously in a perfect world we want it to continue but whatever the future holds I support them and I know they support me.”

As the Heat pushed for the best record and first seed in the playoffs this year, Wade missed nine of the last 12 regular season games due to lingering injuries that forced him to sit courtside in his stylish three piece suits. Ultimately, Miami fell short of the goal and finished second in the Eastern Conference to the Indiana Pacers.

Although James and Wade have developed a friendship that has escalated to a brotherhood as teammates, James could see Wade’s diminishing health as a cause to join greener pastures with a younger flock, in order to preserve hit ability to win more rings.

When referring to a younger flock, one could not help but bring the Cleveland Cavaliers into the mix as a possible destination for James next year.

Despite the negative backlash that the fans of Cleveland showered James with upon his departure, they are willing to forgive the wrongs in order to pair their former savior with their current one, Kyrie Irving.

“When I’m on the floor, I feel like I’m just a kid in Akron who just wants to play,” James said.

Since James’ departure, the Cavaliers have used the draft to add a point guard in Irving, a shooting guard in the playmaker Dion Waiters, a versatile power forward in Tristan Thompson and the apparent bust, small forward Aaron Bennett with their first round draft picks. It is obvious that the one position that Cleveland has left open to fill is a legitimate small forward.

With the hometown ties to Cleveland, and the stain he left on the city by his nationally televised “Decision”, James could very well see his return as the one way to write his wrongs and bring a championship to Northeast Ohio.

“I’m starting to prepare mentally,” James said in regards to the start of the playoffs. “I’m very antsy.”

It is crystal clear that James is focused on the quest to three-peat as a champion and loves spending his time in the picturesque Miami beach, but it remains to be seen if he will keep his talents in South Beach for the foreseeable future.