Chalmers, James spark Heat in 103-84 win to even series 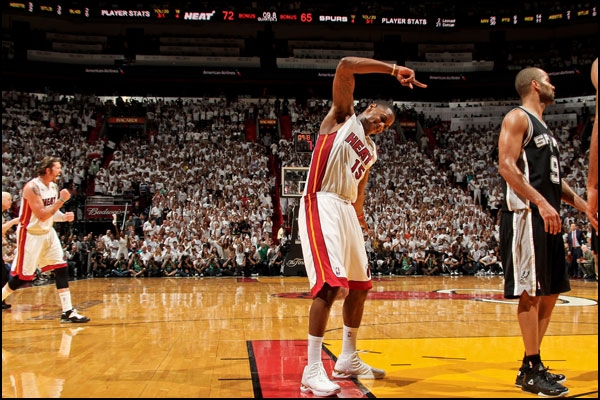 In a series filled with future Hall of Famers, it was Mario Chalmers who stepped up and helped turn the tables back in the Heat’s favor in Sunday’s Game 2, scoring 19 points and combining with LeBron James to spark a decisive 38-9 run en route to a 103-84 win to even the series 1-1 with the San Antonio Spurs.

Chalmers led the Heat in scoring on the night, contributing nine points and two assists during the big Miami run, coming up with another big performance in the NBA Finals in what is becoming a trend after his inspired play in the 2012 Finals. 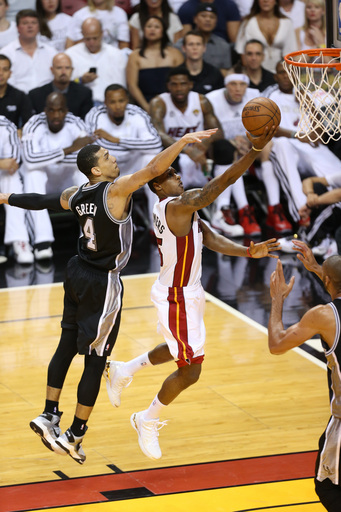 Getty Images, “Mario Chalmers #15 of the Miami Heat shoots against Danny Green #4 of the San Antonio Spurs during Game Two of the 2013 NBA Finals on June 9, 2013 at American Airlines Arena in Miami, Florida.”

“You can’t teach that quality, the big game guts,” Heat coach Erik Spoelstra said of Chalmers’ propensity to come through in the biggest moments.  “He’s got guts.  He had that all the way back in college.  He’s got an incredible confidence in his game and he’s shown that throughout the years even when sometimes, I wouldn’t say it’s irrational, but you’ve got to have guts to play with our guys.  If you don’t, you’ll get swallowed up.”

The game ended up being a laugher by the end, but the Heat appeared midway through the third quarter to be in danger of falling down 0-2 after the San Antonio used a 12-2 run to take a 58-56 lead with 5:54 left in the period.

But a driving finish by Chalmers for a three-point play with 3:11 on the clock put the Heat up for good at 64-62, with Chalmers then assisting on a three by Allen and finding James on a pick and roll for a layup to push the lead to seven.

Another three-point play by Chalmers put Miami up 75-65 through three quarters, as the veteran point guard again took advantage of the Spurs’ hesitance to leave James on the pick and roll by getting to the basket and finishing.

“I’m very mindful of my opportunities,” Chalmers said after the game.  “My teammates expect that of me.  They always tell me I need to be more aggressive and be more of a leader.  That’s what I try to do and leave it all on the court.”

After Chalmers helped right the Heat ship in the third, it was James whose fourth quarter surge blew the game open early in the fourth.  James struggled through much of the first three quarters, starting out 2-of-12 from the field for just eight points going into the fourth. But a mid-range jumper to start the final quarter put the Heat up 12, with James then finding Mike Miller with a cross court pass for a three-pointer to make it 80-65, and the rout ensued from there.

The zenith of the massive Miami run came courtesy of a sensational sequence by James, who made a spectacular block on an attempted Tiago Splitter dunk, then found Allen in the right corner for a three-pointer to put the Heat up 22.

After a steal by Miller, James broke out for a thunderous two-handed dunk moments later, and James stuck a straightaway three-pointer on Miami’s next possession to make it 94-67 with 7:13 remaining.

Miami hit five shots from long distance during the 38-9 run, but James said the game changed due to the Heat’s intensity at the other end of the court.

“We got stops first of all, and then we started to make shots,” he said.  “We started to open up the floor and the shooters made shots.  Rio did a great job of getting into the paint as well and creating offense for us.”  James at times appeared listless through the first three quarters, struggling to find an offensive rhythm against a Spurs defense determined to keep him out of the paint.

But the league MVP came alive late in the third and into the fourth, scoring 11 points during a 6:37 stretch and assisting on three of the Heat’s five three-pointers during the second half run.

“I know my shooters only need a little bit of room to get that shot off,” James said.  “For me, I struggled offensively, but I knew those guys would come through for me and they hit some big shots.”

Despite the early struggles, James finished with a near triple-double after posting his second consecutive Finals triple-double on Thursday, this time going for 17 points, eight rebounds, and seven assists while adding three steals and three blocks.

For the Spurs, the game was a struggle for the Big Three of Tony Parker, Tim Duncan, and Manu Ginobili, as the trio combined for just 27 points on 10-of-33 shots and nine turnovers.  San Antonio struggled to handle the ball after committing just four turnovers in Game 1, giving it away 16 times on Sunday.

“You need to shot well and take care of the basketball,” Spurs coach Greg Popovich said after the game.  “When you turn the ball over the way we did tonight and you don’t shoot well, it’s a bad combination.  It will be very tough to win.”

The Spurs were red hot from the three-point line early on, making 7-of-10 from deep in the first half and 9-of-14 through three quarters.

But they only converted 1-of-6 from deep in the fourth quarter and shot just 41 percent overall from the field for the game.

The Heat shot 49.4 percent overall, converting 10-of-19 from long distance and totaling 22 assists to only six turnovers after struggling to take care of the ball late in Game 1.

“The small things will make a major thing in this series because the talent level is pretty equivalent,” Spoelstra said of his team’s effort.  “It’s going to be loose balls, rebounding, execution, guys with confidence coming in and being aggressive.

“Everybody was fine with it tonight wherever the ball ended up and not getting caught up in an individual ego, but a team ego.”

Allen had 13 points to lead a superb effort by the Miami bench, which outscored the Spurs 40-32.

Miller and Allen combined to make 6-of-8 from the three-point line, with Chris Andersen adding nine points and four rebounds in 14 minutes.

The next three games of the series will be in San Antonio, with Game 3 slated for Tuesday night.