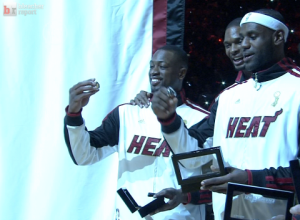 Photo credit Bleacher Report: "While clutching their championship rings containing 219 total diamonds, the players watched the Miami Heat’s second NBA Championship banner raised to the rafters during the pregame ceremonies leading to the battle with the rival Boston Celtics. "

As Queen’s infamous “We are the champions” anthem bumped through the speakers of American Airlines Arena, “King James” and his court were officially crowned 2012 NBA Champions.  While clutching their championship rings containing 219 total diamonds, the players watched the Miami Heat’s second NBA Championship banner raised to the rafters during the pregame ceremonies leading to the battle with the rival Boston Celtics.

In a much anticipated rematch of last year’s Eastern Conference Finals, the Heat opened the 2012-13 season exactly how they finished last season, with a decisive victory.  Lebron James exited early with leg cramps but still had 26 points and 10 rebounds in only 29 minutes as the Heat out-dueled the Celtics 120-107.

The South Beach crowd erupted on the first play of the game when Brandon Bass had his shot blocked by Chris Bosh and then again by Dwyane Wade, leading to a transition three from Shane Battier.  Typically when a team celebrates winning a championship during pregame, they come out of the locker room not focused and in the case of the Heat team six years ago, get blown out 108-66 at home.  On the contrary this is a team on a mission, and unlike any other assimilation of talent in the NBA.

“This team has learned how to compartmentalize over the past two years,” Heat Coach Erik Spoelstra said.

Eerily similar to game four of the 2012 NBA Finals against Oklahoma City, James left the game in the third quarter to get treatment for cramping in his legs, and after returning for a brief stint, went back into the locker room in the fourth quarter.  With James out, the Celtics led by Rondo, cut the Heat’s 19-point lead down to four at 111-107 with two minutes left.  But Miami turned to Chris Bosh, who scored seven points for the Heat in the final two minutes.  Boston sealed their fate when out of frustration, Rajon Rondo wrapped his arms around Dwyane Wade’s neck on a drive, and was called for a flagrant one foul as Boston was held scoreless during Miami’s 9-0 run to end the game.

For his opening act, not even Steven Spielberg could have scripted a better start for Ray Allen in Miami.  In his first shot attempt, Allen drained a three pointer from the corner as the Heat led 31-25 after the first quarter.

“I love those guys, we played together for five years and won a championship together,” Allen said.

At the five minute mark of the second quarter, Allen banked in a three with the shot clock at one second, and got a standing ovation from the crowd when Wade subbed in for him a few moments later.  Sending the league and more importantly his former team a piercing message, Allen made two of his three shots from long range and finished with 19 points, proving why he felt he was a better fit alongside the “Big Three”.

“I learned you don’t give him open three’s in the corner,” Boston Coach Doc Rivers said.

Over the past two years, Miami’s offense has been stagnant at times, allowing James and Wade to beat their defenders one-on-one.  However, the Heat spaced the court with their combination of shooters and attackers, and unselfishly passed the ball around to get everyone involved in the attack.

For the past five years, Boston’s defensive tenacity was a cornerstone of their success however; it was the defensive rotations of Miami’s team defense that allowed them to cover ground and mark any open player before getting the ball.  With James out, the defense surrendered 31 points in the final quarter but came up big down the stretch.

Winning another championship was not the only milestone Dwyane Wade celebrated on Tuesday.  Adding to his legendary resume, Wade became the 123rd  player in NBA history to reach the 15,000 career points scored milestone, joining teammates Lebron James, Ray Allen, and Rashard Lewis.  On a great pass from Allen, Wade who is known for making acrobatic plays, uncharacteristically missed a dunk attempt in the second quarter, but had a circus tip-in off of a Battier miss and still finished with 29 points to lead Miami.

For Boston, veteran Paul Pierce continues to lead the team in scoring and Rajon Rondo is the maestro of the offense.  In his 15th season in the league, Pierce led the Celtics with 23 points and also got a great contribution from Leandro Barbosa off of the bench.  In his debut with the Celtics, Barbosa scored 16 points and connected on all three of his shots from deep.  Rondo did his usual, missing open jumpers but managing 20 points and 13 assists in the losing effort.

Kevin Garnett struggled against the quicker Chris Bosh in the paint, scoring just nine points. Over the past few years, these two have had excellent playoff battles, often times Garnett getting the better of the two.  However, Bosh fought valiantly on defense and mixed up shots from both inside and outside of the lane on his way to a solid 19 point and 10 rebound game.

Going forward in the season, if Bosh can continue to battle in the paint with bigger players, and minimize their effectiveness with his length and athleticism, then Miami will have added another dimension to an already impressive league leading team.

Coming off of last season’s career lows in points and three point shooting with the Washington Wizards, Rashard Lewis scored 10 points in 18 minutes off of the bench in debut with Miami.

The Heat will travel to New York for a Friday night showdown at Madison Square Garden against Carmelo Anthony and the Knicks.  The game will be televised on ESPN, starting at 5 p.m. and Knick’s forward Amar’e Stoudemire will be out six to eight weeks after having knee surgery.