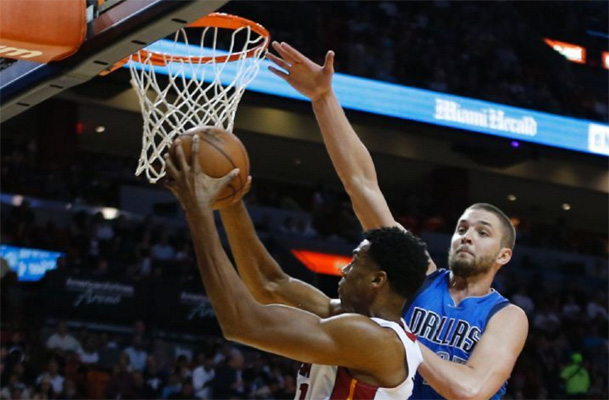 (Miami, FL) — Hassan Whiteside is starting to prove just how much cash he will be worth next year as the Miami Heat routed the Dallas Mavericks, 106-82, on Friday night behind a monster outing from the center.

“I’m just trying to get my All-Star ratings up,” said Whiteside after the game.

Whiteside, who continues to be one of the most dominant defensive big men in the league, is proving that he can get it done on the offensive end of the floor as well.

The 26-year-old center had arguably his best game of the season as he dropped 25 points on a super-efficient 12-16 from the field to go along with a game-high 19 rebounds.

The Heat, who will play 16 more games in the month of January, including two brutal road trips, are off to a fantastic start as their record now stands at 19-13.

Three-time champion Dwyane Wade actually was questionable to play prior to tipoff due to flu-like symptoms, but checked in in the second quarter to finish with 10 points and seven assists.

“Just not a good night overall, on both ends of the floor,” said Dallas Mavericks forward Nowitzki after the game, who finished with 11 points on the night. “But we kept fighting. Every time we got a little momentum, we either made a big mistake on the other end or they made a big shot.”

Next up, the Heat will travel to Washington, D.C. to take on the Wizards at the Verizon Center.
[xyz-ihs snippet=”Responsive-Ad”]