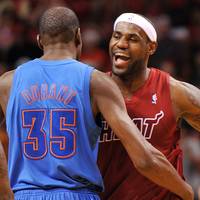 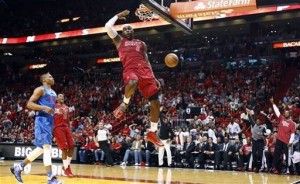 Associated Press, "James shot 60 percent from the field and prevailed once again in the showdown against his rival yet friend Durant."

On the day of the year reserved for traditional family gatherings, two friends squared off on the hardwood of American Airlines Arena in a rematch of the 2012 NBA Finals that surely lived up to the hype.

LeBron James’ near triple-double led the Miami Heat to a 103-97 victory over Kevin Durant’s Oklahoma City Thunder in their first matchup since Miami defeated Oklahoma City on June 21 to win the NBA championship.

James finished with 29 points, nine assists and eight rebounds and played clutch on both ends of the court to close out the game.

Durant led all scorers with 33 points and added seven rebounds, but missed a late three to tie the game in the final seconds.

“He is going to get his shots, his touches, we just have to make it tough for him,” James said about Kevin Durant at halftime.

After Durant scored on a dunk off of a hesitation dribble past James to draw within one at 96-95, James found Bosh open under the basket for an easy dunk to extend the lead to 98-95 with 25.5  seconds remaining.

Durant answered with a jumper from the left elbow to again cut the Miami lead to one.  After Ray Allen extended the lead to 100-97 with a pair of free throws, both Durant and Russell Westbrook missed game tying three point attempts and Miami escaped with the win.

“It was two teams that have the same aspirations, to win a championship,” James said.

James went six straight games without committing a foul until four minutes into the first quarter where he fouled Serge Ibaka to prevent an easy dunk.

“The foul thing is more impressive to me,” James said. “I don’t care about scoring as much.”

“If I wanted to, I could lead the league in scoring, but that is not my job here,” James said. “My job is to do a lot of everything: rebounding, passing, and defending so that takes away from my scoring.”

With much of the Thunder’s defensive focus on the “big three” Mario Chalmers stepped up scoring 12 first quarter points to lead Miami.  Chalmers finished with 20 points, shooting 4-of-8 from deep.

Westbrook did not have his best night, shooting 5-of-19 but scored 21 points and nabbed 11 rebounds for Oklahoma City.

The Heat came out leading 13-2, carrying the momentum at home, but the Thunder surged back cutting the lead to 15-11 with 5:30 remaining in the first.  This caused Heat Coach Erik Spoelstra to call upon Joel Anthony to help protect the rim and combat the size of the Oklahoma City frontcourt.

Matched up against the smaller Shane Battier, Ibaka took advantage of the mismatch, scoring 15 points and grabbing six rebounds, but was a none factor down the stretch.

“The energy and communication that was nice, what was naughty was a couple breakdowns in transition that allowed them to get three point plays,” James said.

After trailing 54-48 at halftime, the Thunder took their first lead of the game at 58-56 with 7:02 left in the third quarter after Durant’s three point play increased the Oklahoma City run to 10-0.

“Just a little bit too sluggish,” Spoelstra said about Miami’s third quarter effort. “Not enough of a motor on both ends of the court.”

But Miami held on with an efficient fourth quarter scoring 29 points, and made all 19 of their free throw attempts for the game.

James shot 60 percent from the field and prevailed once again in the showdown against his rival yet friend Durant.

“He could average 37 points a game, realistically I think,” Spoelstra said.

After knocking down two straight shots from deep in the second quarter, Mike Miller surpassed the 10,000 career points scored mark, becoming the sixth player on Miami’s active roster to achieve the mark.

Miami will travel to Charlotte to square off against Michael Jordan’s struggling Bobcats on Wednesday.