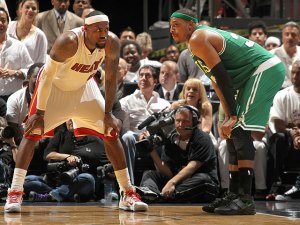 Getty Images, "Miami won’t have to wait long to get its first taste of the life of a defending champion against a highly-motivated Boston team not only fueled by consecutive playoff losses to the Heat the last two years, but also by the chance to face long-time former teammate Ray Allen, who joined the rival Heat during the summer."

The Miami Heat begin their third season of the “Big Three” era tonight in Miami, as the defending NBA champions welcome in old rivals the Boston Celtics to tip off the 2012-2013 season.

The first two seasons since Heat President Pat Riley brought the All-Star trio of Dwyane Wade, LeBron James, and Chris Bosh together in the summer of 2010 have had distinctly separate feels.

The initial campaign was marked by league-wide curiosity about just  how well the trio of stars would blend their games together to compliment each other, and if the roster’s top-heavy talent could overcome its notable holes.

Last season was about redemption for the group after suffering through a disappointing, and by Wade’s own admission, “embarrassing” six-game defeat at the hands of the Dallas Mavericks in the 2011 Finals.
But the primary sentiment going into this season seems to surround the promise of a potential Heat dynasty after the team’s breakthrough victory over the Oklahoma City Thunder in last year’s Finals, as well as James’ banner season that included his first NBA title, his third league MVP, and was capped by his second gold medal playing for Team USA in the London Olympics.

Most of the doubt and skepticism that followed this team through the first two years after its formation has fallen to the wayside, with the Heat coming into this season as the clear favorite to repeat.

Miami won’t have to wait long to get its first taste of the life of a defending champion against a highly-motivated Boston team not only fueled by consecutive playoff losses to the Heat the last two years, but also by the chance to face long-time former teammate Ray Allen, who joined the rival Heat during the summer.

It’s a position the Heat themselves are quite familiar with, having been in the same place just a year ago when they traveled to Dallas to open the season with revenge on their minds.

Miami won that game going away, and Wade said he still remembers the feeling he had before and after that contest.

“It didn’t bring the championship back, but it did make some satisfaction in that game,” he said. “We came out and put it on them, so we understand the mindset for Boston. We know what the Boston Celtics bring against the Miami Heat. I don’t know about any other team, but when they play us, we get their best.”

The Heat weren’t the only Eastern Conference power to strengthen its roster in the offseason, as the Celtics made some big additions with sharp-shooting defensive specialist Courtney Lee and long-time Heat nemesis and former Mavericks guard Jason Terry.

Though lightning quick guard Avery Bradley still is out recovering from the shoulder injury that ended his season in last year’s playoffs, the Celtics have had the look in the preseason of a much quicker and more athletic team than the one the Heat saw last season.

Replacing the 37-year-old Allen with the younger, more athletic Lee has played in a role in that, as well as the return of veteran forward Jeff Green, who returns to the league after a year away due to undergoing heart surgery and looked impressive in the preseason.

But while there are some new pieces in place, the Celtics are still a team driven by the penetration and creativity of Rajon Rondo, the scoring and shot-making of Paul Pierce, and the defense and leadership of Kevin Garnett.

The Celtics are a tough match for the Heat on any given night, but on “Ring Night,” which has annually proved a distraction to the celebrating team on opening night, may give Boston a slight competitive edge in this game.

“It’s a special night. We want to honor and respect what we accomplished last year, and we want to do it for our fans,” he said. “But we want to make sure the main thing is the main thing, and that is to perform and play to our best level. We don’t want to ruin the night.”

The pregame festivities will see each Heat player who was a member of last year’s championship squad get his ring, but when the ball is finally tipped, everyone’s eyes will be transfixed on James, as he begins what many are expecting to be a dominant and perhaps historic season for himself and the team.

But James himself isn’t getting caught up in expectations.

“I always want to be the best, not just for myself, but for my teammates,” he said. “I’ve heard a lot about what my career should be or shouldn’t be, but I control my own destiny to just go out and play the game of basketball the right way.”

Whatever happens tonight, the significance will likely be overstated by many, though not by James or his teammates.

“This is not a statement game. It’s game one,” he said. “Both teams want to win, but there are 82 games in a season. Both teams want to see where they are coming out of training camp and just try to work on some of the things we’ve been doing.”

For the Heat, it’s the first chance to integrate the talents of Allen and fellow free agent signing Rashard Lewis into the rotation in a real game.

With the additions of two of the NBA’s all-time 3-point shooters to go along with the “Big Three” in its third season together, expectations for the Heat couldn’t be higher.

“It’s one of the best if not the best team (I’ve played on),” James said. “But we’ve got work to do. We know where we want to be and we can’t be where we want to be right now. We understand that. We have to take it through every process and go through the ups and downs of the season. We just want to get better each and every month.”