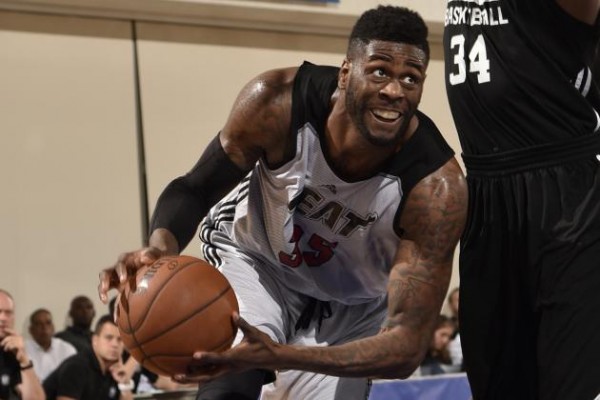 The Miami Heat have filled up their roster with NBA journeymen for the upcoming season.

In the flurry of transactions that took place Sunday, there is one player that stands out from the rest — Willie Reed. Reed is a classic example of leaving college too early and consequently struggling to stay on NBA rosters while shuffling around in the D-League.

But that’s all behind him now after he had his best season as a professional in Brooklyn last year. He earned a spot on the Brooklyn Nets’ roster by performing extremely well in the D-League and on the Heat’s summer league roster last year.

While playing for the Grand Rapids Drive and Iowa Energy, Reed averaged 16.4 points, 12.1 rebounds, 1.9 blocks and made it to the D-League All-Star Game. He continued his strong play into the summer for the Heat averaging 13.5 points, 7.8 rebounds and 1.8 blocks per game. There were many reports that the Heat loved Reed’s game last summer, but they did not pick him up for the roster, so Brooklyn signed him to a one-year, $500,000 deal.

His time with Brooklyn is easy to overlook because statistically, he wasn’t blowing anyone away averaging just 4.7 points, 3.1 rebounds, and 0.8 blocks in 39 games, while shooting 57.1 percent from the field. But because of his limited role off the bench, he only played 10.9 minutes per game. His per-36-minute numbers give us a better insight into the player he could become: 15.4 points, 10.3 rebounds, and 2.5 blocks per game. A player with that sort of potential is definitely an asset that could come off the bench to support Hassan Whiteside next season.

Obviously, this is a small sample size, but since Reed signed a two-year deal (with a player option after one year) with the Heat, he will be given ample opportunities to prove his merit. With the loss of three starters, the lineup and rotations are sure to be completely redesigned this year, giving Reed the chance he needs to impress coach Erik Spoelstra. As someone who always emphasizes that importance of hard work, Spoelstra is sure to find that Reed embodies that trait and then some. Here is what former teammate Shane Larkin had to say about Reed:

“Willie is a really good dude,” Larkin said. “He’s family oriented and has worked very hard to get to where he is now. Obviously we didn’t have the best season and it could have been easy for anybody on the team to pack it up, but Willie was constantly working at the gym early and even after practice. He was always getting good work in. But I think the best thing about Willie that I can remember is him as a teammate. He is always supporting the team. Whenever anybody makes a play – whether it is a steal, a charge, a three or a dunk – he is the first person to stand up and wave his towel in the air or do his signature three-point celebration. And on the court, he is a huge competitor and a very confident guy. He has great timing on help-side defense and he works very hard on the offensive glass. I’m happy he got his chance in the league this year and hopefully he can find himself on another roster come next season.”

In an interview with Alex Kennedy of BasketballInsiders.com, Reed emphasized that he has improved every year he’s been in the league.

“I think I took that next step and being in the NBA this past season, I think I took a huge step. I went from being a guy who was injured at the beginning of the season and wasn’t really playing much to being a rotational guy. I think that me proving that I belong just shows that I’m making improvements and I think I could even take my game to another level,” said Reed.

The Kansas City native knows that being a two-way player is how you can earn minutes in the NBA, so being versatile enough to defend multiple positions is key.

Even though defense is his strong suit, Reed said he wants to focus on developing his offensive game more. This summer he has been working out in Los Angeles and improving his post game has been a huge focus.

“I also want to add offense to my game and I think playing against Karl-Anthony Towns and Chris Bosh helped me. I think they allowed me to see offensively what it is that I need to go to and work on. Obviously, my game isn’t going to be what their game is, but I think that if I can contribute by catching and avoiding the defense, making the extra pass and finishing in the post, I think that makes me a lot more valuable.”

While Bosh’s return to the court is still uncertain, Reed could definitely learn from the knowledge and experience of the 11-time All-Star during this upcoming season.

Reed has shown that he can thrive in a high-paced offense like the Heat had in last year’s summer league. Pat Riley and the front office added more athletic and younger wings in the last couple days. This will allow Spoelstra to turn Goran Dragic loose and play at the up-tempo pace he thrives in. If the Heat decide to play at the rate they ended last season at, Dragic could reach the level of his Phoenix days.

Since the Saint Louis University product definitely prefers to play the run-and-gun style offense that made the Heat most effective last year, he could see some early playing time.

“I think the biggest thing is trying to get on an up-and-down, faster-pace team. I think that I really excel in that. I’ve done well in that kind of system, especially in Summer League last year when I played on a fast-paced Miami team and I was able to succeed. I think the biggest thing for me is getting in a position like that, where the point guard pushes the basketball and we play at a fast pace. I really feed off of that, turning defense into offense. I think that’s a big thing for me. I’m not really worried about the destination. I just want to make sure it fits me and gives me the best opportunity to succeed. I think that if I can do that, then I can really push and make a name for myself here in the league,” said Reed.

Throughout his long journey to finally make it in the NBA, the 6-foot-9 big man has had to overcome obstacles both on and off the court. He struggled to support his family while in the D-League so a huge burden was relieved when the Nets signed him. A couple months later, he suffered a torn ulnar collateral ligament in his right thumb in a preseason game against the Boston Celtics last year. Fighting his way back from injury and finally becoming a role player towards the end of the season, Reed has earned his spot in the NBA.

Incidentally, the Heat are one of the best teams in the league at developing talents that other teams have passed up on (see Whiteside). Spoelstra has earned the reputation of using the best of a player’s skillset to allow him to flourish on the court. Reed is set to be the next player that goes through the Heat’s developmental system. The last time the Heat picked up a big man bouncing around in the D-League they found a superstar. Who knows what they could get this time?
[xyz-ihs snippet=”Responsive-ImagenText”]