Should the Miami Heat Consider Dealing Hassan Whiteside to the Washington Wizards? 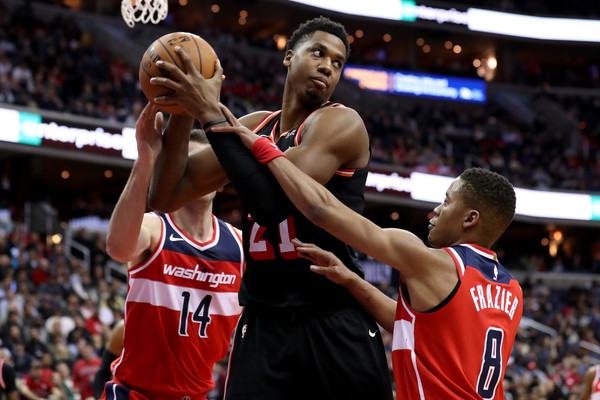 On Tuesday, the Washington Wizards announced that they traded center Marcin Gortat to the Los Angeles Clippers in exchange for guard Austin Rivers. This deal, which leaves the Wizards with a hole at center, opens up the chance of a potential trade centered around Hassan Whiteside.

Bradley Beal and Otto Porter Jr. are two of the players the Heat could potentially acquire in this deal. Out of these two, the Wizards would be more willing to deal Porter as Beal is coming off a season in which he averaged 22.6 points and 4.5 assists per game while being named an All-Star for the first time in his career.

As for Porter, he averaged 14.7 points and 6.4 per game last season while shooting 44.1 percent from three. The problem with him is his contract. He is due about $26 million for the 2018-19 season and $27.2 million for the 2019-20 season. Porter holds a player option for the 2020-21 season. Should he accept that, he would be due around $28.5 million. With these figures, he would be the highest-paid player on the Heat while potentially being the fourth or maybe fifth option on offense. He would be of value to Miami on defense, where he has excelled so far in his NBA career.

By swapping Whiteside for Porter, the Heat would put themselves about $600,000 closer to the luxury tax for the 2018-19 season. This is something they might not want to do for a team that is seemingly stuck in mediocrity. Miami still has to account for the potential signings of Wayne Ellington, who has reportedly been told by the Heat that they want him back, and Dwyane Wade, who has said that if he were to come back and play a 16th NBA season it would only be with the Heat.

Another potential issue that could arise is that Washington might need extra incentive to take on a player whose trade value has reportedly hit a low. This means that the Heat would need to add sweeteners so that Washington would be comfortable with the trade. Some of those sweeteners could be any of the following: Justise Winslow, Bam Adebayo, or a first-round pick. Tyler Johnson would not be able to be included in any potential trades because by taking on his salary, the Wizards would put themselves over the luxury tax.

Many within the Heat organization reportedly want to trade away Whiteside and with the Wizards now having a big need at center, this might be the perfect time to do so. However, it remains to be seen if the Heat will inch themselves closer to the luxury tax in order to get rid of a player who, last season, publicly complained about his playing time and was fined after going on an expletive-laced rant.
[xyz-ihs snippet=”HN-300×250-TextnImage”]