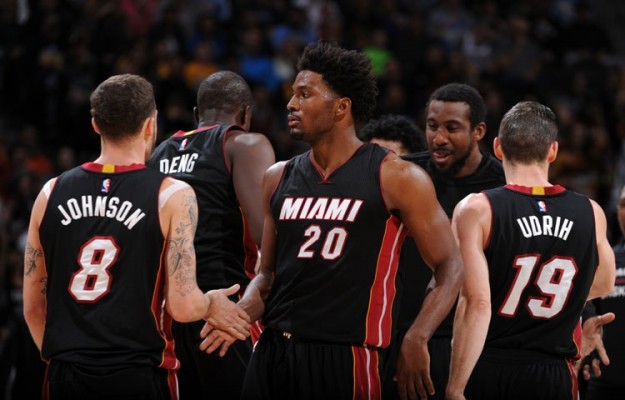 Now at the halfway point through the season, things haven’t cleared up much, with the picture of potential currently more distorted than ever. It has become increasingly more difficult to gauge this Miami team for what they are because, well, they don’t even know what they are.

Before the season started, many experts predicted this team to reach the Eastern Conference Finals, due in large part to their strong starting five and impressive offseason additions. On the other hand, some predicted they would miss the playoffs entirely. While the Heat currently sit somewhere in the center of the Eastern Conference standings, it still seems impossible to make a confident prediction on where they’ll end up.

At one point this season, the Heat held the number one spot in the Eastern Conference after a win against the Cleveland Cavaliers. It seemed clear that this team was destined for great things as they looked to have figured it out. Now we are getting comments from the team like:

“Honestly, I don’t have an answer for you,” Luol Deng told Bleacher Report earlier this week.

“We just came out flat,” said Erik Spoelstra after a loss to the Milwaukee Bucks.

“That’s about as bad a second half as you can play in this league,” said a visibly frustrated Spoelstra after a loss to the L.A. Clippers.

How many times have we seen Spoelstra sit at the postgame press table and talk about how the team just came out “flat” before we begin to ask why?

If there are particular issues that continuously plague the team, they must be addressed and corrected. This team does an almost masterful job of getting over losses and perplexingly poor performances and moving on to the next opponent without a second thought. It’s hard to tell if that’s a good thing or a bad thing.

Granted, you need to have a short memory in this league, but at what point does it become just plain irresponsible to ignore such alarming trends?

Glaring inconsistency from one half to the next this season make the age-old anecdote “a tale of two halves” more applicable than ever. It’s difficult to determine why the team has so much trouble staying consistent. Sure, there have been injuries. Hassan Whiteside and Goran Dragic have missed some games. Coach Spoelstra is still obsessively tinkering with lineups, which could have something do with it too, but none of that should account for such monstrous gaps in consistency.

Perhaps these two tweets by Barry Jackson of The Sun-Sentinel and Ethan J. Skolnick of Bleacher Report sum it up best:

Blown a bunch too. This team makes no sense. https://t.co/l3qf1U1yDb

In a conference where one win or loss can mean the difference between a two or three seed and not making the playoffs at all, the time to focus is now. This Heat team needs to work day and night on finding their offensive identity.

Dwyane Wade is doing all he can, but simply giving him the ball in isolation late in the fourth quarter and letting him jack up jumpers at will is not a winning strategy. The talent is all there for Miami but offensive sets need to be established.

Miami currently ranks 20th in the league in offensive efficiency but an impressive sixth in defensive efficiency, and as Chris Bosh so fittingly phrased it after Tuesday night’s loss to the Bucks:

“There’s only so much defense we can play,” he told reporters.

So, what’s the fix? Is there one? Will Miami continue to split each season series with each opponent until they eventually end up with a .500 record come playoff time? Right now it’s hard to say, but the team needs to buckle down and figure it out and it all starts with the coaching.

Miami can’t rely on signature pep talks by Udonis Haslem and Juwan Howard forever. Spoelstra needs to look at this thing under a microscope, assess the weaknesses and figure out how to turn it around. That’s what great coaches do, is it not?

After all, Erik Spoelstra is a great coach, isn’t he? At this point, it may be tough to answer that question, but he does have the entire second half of the 2015-16 season to show the world what he and this team can do. It will take grit, mental toughness and, at some point, a breakthrough in the offensive approach this team takes, but most importantly, it will take consistency.
[xyz-ihs snippet=”Responsive-Ad”]