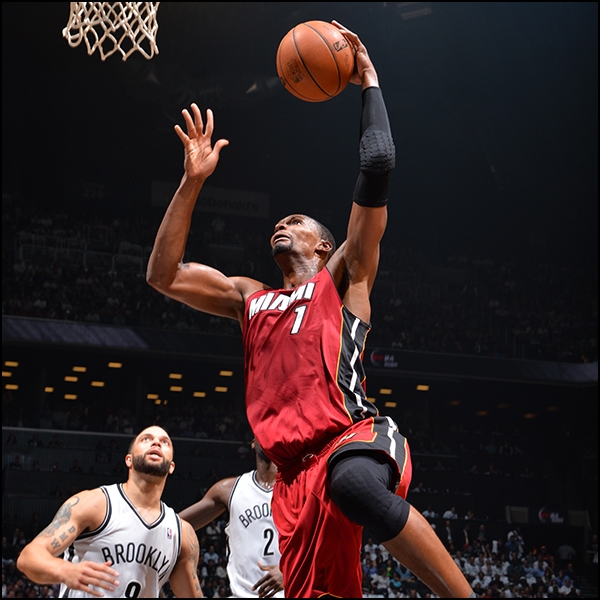 Chris Bosh: The Unsung Marksman — Perhaps the most under-appreciated member of Miami’s “Big Three,” Chris Bosh probably doesn’t get enough credit for his effort, his ability, and his huge plays when the stakes are at their highest.

Very few big men—especially those who average almost 16 points and six rebounds a game—receive as little attention as Bosh does.

To be fair, when the greatest player on the planet in LeBron James is on your squad, getting overlooked tends to happen. It’s not just fans that are overlooking him either; opposing teams are constantly forgetting to closeout on Bosh, and when you forget to closeout on Bosh, you’ll never forget Bosh’s name ever again.

After being a midrange shooter and face-up-and-attack-the-basket big for the early parts of his career, Bosh has slowly morphed into a three-point threat. Those scoffing at the concept of Bosh becoming a marksman shouldn’t laugh that statement off, however.

The fact is, he’s nailed game winners, and he’s doing it consistently. With that in mind, it’s time to acknowledge his ability as a clutch three-point shooter let alone a three-pointer shooter.

And it’s not like these clutch shots are only going down in the regular season. In fact, Bosh just knocked down a few, critical three-point buckets in the Heat’s most recent playoff game against the Brooklyn Nets in Game Four of the Eastern Conference semifinals.

At around the 5:54 minute mark, with the Heat down one, LeBron found Bosh with a crisp crosscourt pass, and Bosh swiftly squared up and splashed a go-ahead three to swing momentum in Miami’s favor.

In the waning minute of what would be a spectacular 49-point outing by Bron, Bosh nailed yet another go-ahead three-point bucket from the right corner to give the Heat a game-sealing three-point lead over the Nets to take Game Four.

And if you still think these shots are flukes, believe it or not, Bosh practices for these exact situations in which they need him to hit key three-pointers.

According to the PalmBeach Post, Bosh prepared for this exact shot attempt just prior to game four, and with enough repetition, you take what you do in practice and you execute it in the games—just like Bosh has been doing all year.

Even LBJ has noticed the hard work paying off, and he recognizes how vital Bosh’s ability to spread the floor has been throughout the season and playoffs. “He’s big time, and his ability to shoot the ball is a great equalizer for our team.”

LeBron hit the nail on the head—if Bosh can shoot the ball as well as he has, it becomes that much tougher to beat the Heat. Having Bosh in the game spaces the floor and forces defenses to chase him out on the perimeter, and if you over-commit on the shot-fake, Bosh can put the ball on the hardwood and finish with the best of them at the rim.

Early in his career, Bosh was capable of hitting three-pointers in desperation situations, but such opportunities seldom presented themselves. Per HoopData.com, his shot attempts have fluctuated throughout the years, but this year, he is attempting, on average, over three three-balls per game—a career high. His behind-the-arc percentage has hovered around 28-percent the past two seasons, but this season, it bumped up to almost 34-percent. That’s a very significant stat to keep in mind—he’s not only shooting more, but he’s making more as well.

His shot-making ability will not only help in those situations where it’s basically a player-dependent attempt—like randomly finding him in transition as a trailer, but it will also help in drawing up set plays.

Most notably in the previously linked clip of Bosh nailing the gamewinner in Portland, Dwyane Wade brilliantly attacked the basket and drew two. He then kicked the ball out to a wide open Bosh at the top of the three-point arc, and he canned a deep, deep shot.

That was a great example of on-the-fly offensive versatility provided by Bosh’s marksmanship.

From a purely strategic standpoint, Bosh’s ability allows for limitless possibilities, but for the Heat, it’s just one extra weapon in their back pocket as they trudge forward to achieve their much desired three-peat.