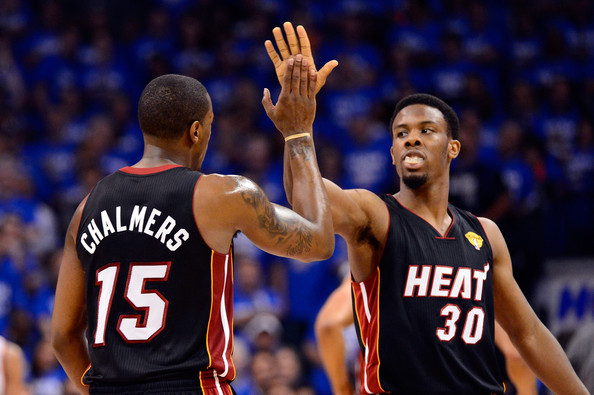 Getty Images, "Cut to this season, and both Chalmers and Cole appear to be much-improved players who are in the process of putting to an end the conversation about the Heat’s need for a true lead guard that persisted during the last two seasons."

When the Miami Heat put together its super team led by the power trio of LeBron James, Dwyane Wade, and Chris Bosh two years ago, it did so knowing that by filling three positions with all stars on max contracts, it would leave them weak at the other two spots.

Predictably, the Heat struggled to find consistency at either point guard or center, platooning players at both positions.

Joel Anthony, Zydrunas Ilgauskas, and Erick Dampier took turns at center with none of the three proving a permanent fix, while Mario Chalmers, Carlos Arroyo, and Mike Bibby all struggled to give the Heat anything resembling consistent point guard production.

In the Heat’s championship run last season, it eventually solved the center problem by not playing a center at all, instead going small with Bosh at center and James and free agent addition Shane Battier tag teaming the power forward position.

The smaller, faster, and more versatile front court thrived in the NBA Finals and has continued to cause headaches for opposing defenses to start the current season.

But while creativity and free agency helped solve the center dilemma, the questions at point guard are being answered more organically.

Miami has just two true point guards on the roster, both drafted by the Heat: Mario Chalmers in the second round in 2008, and Norris Cole late in the first round in 2011.

Cole got off to a rousing start to his rookie season highlighted by a 20-point performance against the Boston Celtics in the second game of the season before later hitting the rookie wall and eventually falling out of the rotation altogether.

Cole re-emerged in the playoffs and had some good moments, the best of which came in Game 4 against the Oklahoma City Thunder when his two first-half three-pointers helped spark a Heat rally from an early double-digit deficit.

That game also featured a breakthrough performance by Chalmers, who went for 25 points on 9-of-15 shooting to help lift Miami to a 3-1 series lead.

Cut to this season, and both Chalmers and Cole appear to be much-improved players who are in the process of putting to an end the conversation about the Heat’s need for a true lead guard that persisted during the last two seasons.

When Chalmers sat out much of the preseason due to injury, Cole used the opportunity to display just how far he has come as a player, showing an improved shooting stroke in making 9-of-11 from the three-point line in the exhibition season.

So far, the three-point shooting hasn’t translated to the regular season – Cole has made just 2-of-7 from long range thus far – but by every other measure, Cole appears to be a better and more comfortable player, raising his field goal percentage from 39 percent last year to 45 this year, and tallying a 2-to-1 assist-to-turnover ratio.

The progress made is a product of a summer of dedication by Cole, Heat coach Erik Spoelstra said.

“He was here literally 10 days after we won, and then he’s preparing for summer league,” he said.  “You could see it in his improvement in his shooting.  It shouldn’t be a surprise to any of us.  He had a terrific summer in terms of commitment.”

However, it’s the change in Chalmers’ game that is having the bigger impact on the Heat thus far, as the often inconsistent guard seems to have made a significant leap in his fifth year, and is on pace for career highs in assists and Player Efficiency Rating.

After failing to produce a single double-digit assist performance all of last season, Chalmers has already had two in six games this season, and is averaging six per game while turning the ball over just 10 times in 171 minutes.

He is assisting on 28.5 percent of Miami field goals when he’s on the court this season, compared to just 19 percent last year.

The increased play-making from the point guard position has helped Miami move up from 20th in team assists last season to second this year.

“He’s really improved at reading the defense, reading the game, being a playmaker, and getting us organized in the offense,” Spoelstra said of Chalmers.  “The assists are a recipient of good ball movement and letting the offense generate good shots for us and not trying to force it.

“We’re not running any play calls for him. The way the offense is set up with the spacing, anybody can be a playmaker.  The ball happens to end up in his hands a lot after the initial trigger, and he’s making nice plays and nice reads out of the secondary part of the offense.”

Chalmers’ teammates, whose frustrated verbal outbursts directed at him during games became something of a running punch line last season, have also noticed the change in his game.

“He’s just grown,” James said. “He’s a veteran point guard. He’s taken that challenge and taken that role of being that point guard that gets us into our sets and makes it happen.  He’s doing some really good things for our offense.  We haven’t really been on his back this year.  He’s been playing well.”

The additions of shooters Ray Allen and Rashard Lewis, as well as the Heat’s embrace of small ball and putting five offensive threats on the court at almost all times, has helped create more opportunities for Chalmers to make plays.

His ability to get into the teeth of the defense and find open shooters, particularly in scramble situations and late in the shot clock, has made the Heat virtually unguardable at times.

“Mario is equally a threat to score (or pass),” Allen said.  “He can go to the basket, he’s got a good mid-range game, a great three-ball game, and he’s just been great at getting into the gaps and making the extra pass.  He’s getting us into the offense and setting the tone.  I believe the way he plays opens up the floor for everyone out there and makes us unpredictable on offense.”

With the Heat coming off of consecutive seasons and playoff runs in which James and Wade had to do virtually all of the creating and playmaking on offense, the continued development of Chalmers as an initiator – and to a lesser extent, Cole – could be key in not just making Miami more difficult to defend but also in preserving some energy for the Heat’s two best players come postseason.

But for that to happen, Chalmers must make the final step in his development, which is to shake off the inconsistency that has been a hallmark of his career thus far and perform at his current level on a regular basis.

If that happens, there may not be many good defensive answers remaining for Heat opponents.

AllenAssist-To-Turnover RatioboshChalmerschriscoledwyaneheatjameslebronMariomiaminorrisPlayer Efficiency RatingRaywade
← Previous Story Breakdown of the 2012-13 Roster for the Miami Heat
Next Story → Dwyane Wade Out With Sore Left Foot, Questionable for Saturday