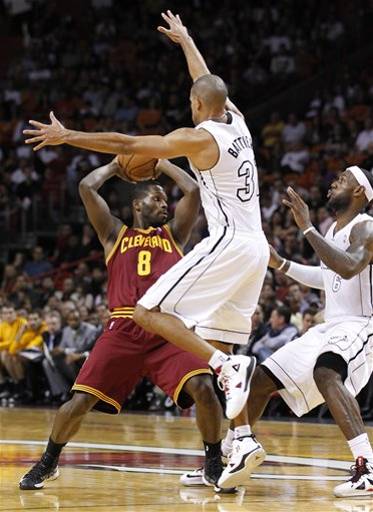 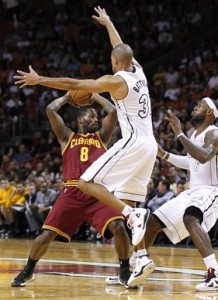 The Associated Press, "Battier said Monday afternoon that team doctors did not perform an MRI on the knee and that he’ll simply get treatment on it to try to get the swelling down over the next few days."

The Miami Heat could be without starting forward Shane Battier for at least Thursday’s home game against the San Antonio Spurs and perhaps beyond, as the 12-year veteran suffered a sprained MCL during Saturday’s victory over the Cleveland Cavaliers.

Battier said Monday afternoon that team doctors did not perform an MRI on the knee and that he’ll simply get treatment on it to try to get the swelling down over the next few days.

Heat coach Erik Spoelstra said that it was too soon to make any determination on whether he could be available for Thursday’s home game against the San Antonio Spurs.

Battier wouldn’t even hazard a guess as to when he would return to the lineup.

“You want to make God laugh? Tell him your plans for tomorrow,” he said.

The veteran forward did say that the sprain wasn’t as serious as the one he suffered as a member of the Houston Rockets.

“I think it could’ve been a lot worse than it actually was,” Battier said.

If the Heat do have to live without him for a significant amount of time, Spoelstra said the loss could not be quantified by the 7.0 points and 2.5 rebounds Battier is currently averaging on the season.

“All of us already know all the little things he does to win,” he said. “You take a guy like that out, it doesn’t necessarily show up in the box score. Other guys will have to step up in those intangible categories. We have guys who can do that, and we can look at different rotations, but it still comes down to who will replace all of those little things that he does arguably as well as anybody in the league.”

Considering the Heat’s reluctance so far to take Ray Allen out of his reserve role, the prime candidates to replace Battier in the starting lineup should he miss time would be Rashard Lewis, who seems to have fallen out of favor after not playing Saturday’s game due to a coach’s decision, Mike Miller, who has performed well in his two starts in place of Dwyane Wade, and Udonis Haslem, who would give the Heat a more conventional power forward in the starting group.