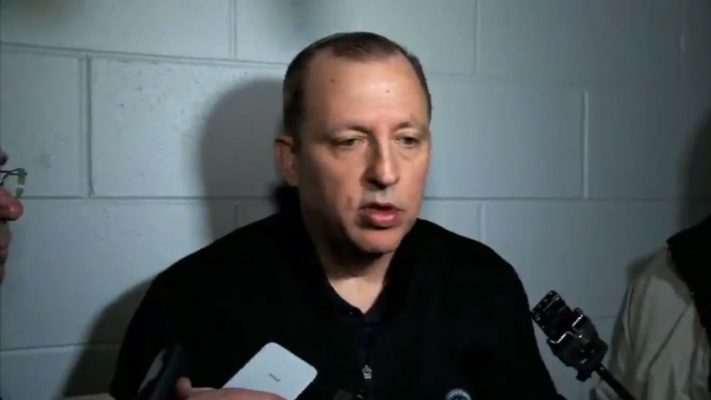 The drama surrounding All-Star forward Jimmy Butler has seen many ebbs and flows since he requested a trade several weeks ago.

Throughout that time, no team has seemingly gotten closer to actually getting a deal done for the mercurial star than the Miami Heat. At every turn, however, it has appeared as though Minnesota Timberwolves head coach Tom Thibodeau has gotten in the way.

On Wednesday, Butler rejoined his current teammates for the first time in a scrimmage. According to reports, he verbally confronted fellow players and Wolves general manager Scott Layden.

With little signs that the Butler drama will come to an end any time soon, Thibodeau himself has come forward to address the most recent rumors regarding his star player.

Here's Thibs from this morning (h/t @abcnewsone/ESPN). The best way, IMO, to get in game condition is to play, wait for it, in an actual game. But Butler is back here in the Twin Cities to work on his conditioning. This saga is the gift that keeps on giving. #Twolves pic.twitter.com/vpIPjXc0Qm

“I did expect him there. Some things that have been reported are correct, some are not,” Thibodeau said of the Wolves’ scrimmage that captured the attention of the entire NBA world. “It’s not uncommon when players scrimmage that there will be some talk, so it was competitive.”

He then directly addressed the members of the press he was speaking to, condemning them for focusing on the negative aspects of Wednesday’s team scrimmage.

“I’m not going to get into all that stuff. That’s you guys. I’m not answering to all the rumors and stuff that gets put out. That’s garbage. It’s how you view, like you want to pick and choose what people say. So, I’m not going to comment on any of that because he’s also praised a lot of guys and that’s never reported.”

It’s clear that Thibodeau is attempting to do quite a bit of damage control for both himself and Butler. If the Wolves fail to get a deal done before the beginning of the regular season, Butler will most likely end up playing alongside the very players he accosted just days ago. How he and his teammates perform could only add more fuel to this fire.

As for the Heat, it seems they are backing off of the trade for the time being. Though, that does not indicate that they won’t continue trying to get a deal done for Butler before the trade deadline this February.
[xyz-ihs snippet=”HN-300×250-TextnImage”]