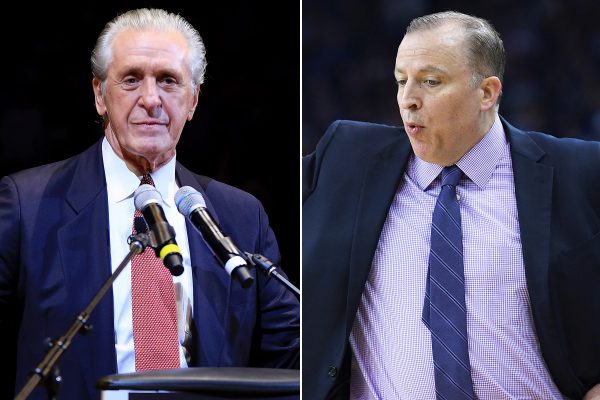 Trade negotiations between the Miami Heat and Minnesota Timberwolves concerning forward Jimmy Butler broke down last weekend after the Timberwolves made an effort to ask for more in compensation for the veteran.

One report now indicates that Miami team president Pat Riley responded emphatically to the request made by Minnesota head coach Tom Thibodeau by calling him a “motherf—–” before then hanging up the phone.

“There’s been a couple of different incarnations of this deal. The first one, the Heat didn’t want to take back Gorgui Dieng. Then, the next incarnation of the deal was ‘OK forget it, let’s just do it straight up, just for Jimmy on your end.’ They finally relented on Josh Richardson, they were giving them Josh Richardson, then Dion Waiters was going to be the cap filler, and then a protected first-round pick. The medicals were exchanged, which generally in the NBA means this is a done deal. And then, Thibs called back and wanted more picks. And Pat Riley literally—I was told—called him a motherbleeper and hung up the phone.”

Riley’s abrupt ending of the conversation had previously been noted, though exactly what was said at the the time was unclear. There have been some reports that such talks will resume at some point, though if and when that happens is also a mystery.

Since Thibodeau and general manager Scott Layden joined the Timberwolves organization, the team has acquired a reputation for being difficult to deal with in other negotiations. Thibodeau had acquired Butler last year, shortly after taking the Minnesota head coaching position,. However, the contentious relationship between the veteran and some of his teammates resulted in a trade request shortly before the start of training camp.

Butler currently remains a member of the Timberwolves, though it’s clear that he’ll be dealt at some point before the February trading deadline. He’s expected to become a free agent next July, meaning that if he remains in Minnesota all season, the team will get nothing in return.
[xyz-ihs snippet=”HN-300×250-TextnImage”]