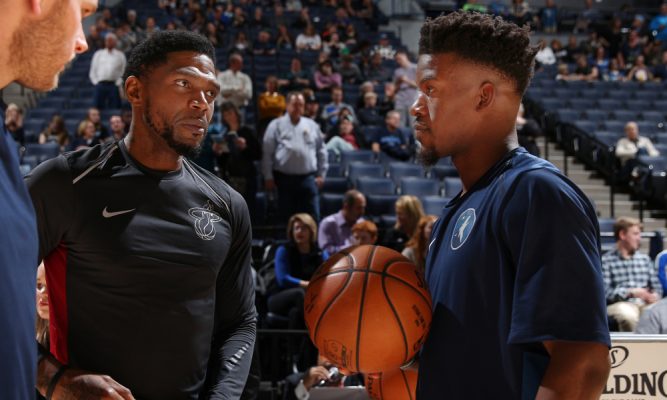 The window for the Miami Heat and Minnesota Timberwolves to reach a deal to send Jimmy Butler to South Beach is closing fast. After trade discussions have risen and fallen multiple times over the past couple of weeks, the two teams seem to be heading away from each other rather than toward.

According to Anthony Chiang of the Miami Herald, the Heat will not push Minnesota for Butler any longer:

“The Miami Heat is not pushing to resume discussions with the Minnesota Timberwolves on a Jimmy Butler trade, according to a Heat source. In the wake of an ESPN report that a deal between the teams was close but fell apart over the weekend when Minnesota asked for more from Miami, a Heat source indicated Thursday the organization is ready to move on if need be after the Timberwolves rejected its offer and added the Heat has not initiated any further conversation with Minnesota since.”

Chiang offered an additional piece of information that would indicate a deal could still get done, but would have to emanate from the Timberwolves:

“The source declined to rule out the possibility of a deal still happening with Minnesota, but made it clear Miami would not be the one initiating trade talks. With the start of the regular season less than a week away, the Heat is ready to move past trade rumors.”

Even though the 29-year-old from Houston, Texas has indicated his desire to leave Minnesota, the Timberwolves have been reluctant to make a deal. Miami reportedly offered Josh Richardson and a first-round pick last weekend, but Minnesota refused.

The Timberwolves would not only be receiving a rising star, but also a team-friendly contract in Richardson. Last night against the New Orleans Pelicans, Richardson logged 25 points, three assists, four rebounds and one steal.

Miami seems willing to give up the former University of Tennessee standout, but is better served to simply move on and prepare for the regular season.
[xyz-ihs snippet=”HN-300×250-TextnImage”]