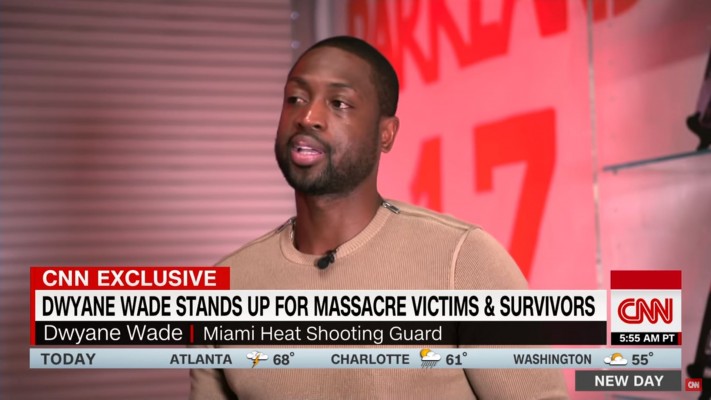 Ever since tragedy struck the students of Marjory Stoneman Douglas High School on Feb. 14, when 17 students were killed in a mass shooting, Miami Heat star Dwyane Wade has been an unwavering ally.

His support began when it was revealed that one of the victims of the shooting had been buried in Wade’s jersey. It continues now in the form of the time and money that the NBA icon is dedicating to raising awareness about gun violence in America.

On Monday, CNN released a recent interview in which Wade discussed why he has decided to put so much effort into making sure the gun crisis remains front-page news.

“How can we move on — as adults, as parents — when we know our kids are not safe at school? This has not happened one time. This has now happened multiple times,” Wade said to CNN’s Dave Briggs. “I can’t imagine what these families are dealing with, are going through. But what I try to do is I try to put myself in that situation and the heartache and the hurt, just even trying to imagine it, is too much to bear.”

Wade said that his own upbringing in inner-city Chicago, where gun violence has reached epidemic-like levels, has helped fuel his dedication to raising awareness.

He added that the fact that the mass shooting occurred in the high-income community of Parkland, Florida has helped raise national awareness. According to the three-time NBA champ, the Stoneman Douglas students are aware of that, and their desire to help people all over the country is what has inspired Wade to get even more involved.

“One of the cool things about going to the school and hearing the kids talk, they know it,” Wade explained. “They understand that they’re the voice for so many.”

From the students’ dedication to their cause, it seems clear that they won’t stop until gun laws in this country are changed. It also seems that Wade will be there to support them every step of the way.
[xyz-ihs snippet=”HN-300×250-TextnImage”]