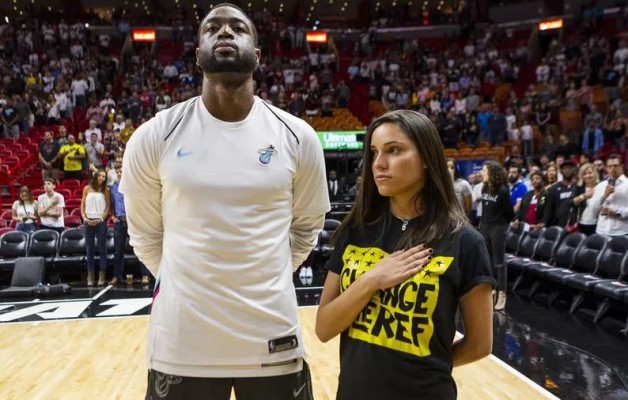 17-year-old Joaquin Oliver was one of the biggest Dwyane Wade fans and desperately wanted one of his “Miami Vice” themed jerseys when the shooting guard was traded back to the Miami Heat.

In an interview with Univision, Oliver’s father remembered a specific conversation they had the day Wade came back.

However, Oliver was unable to ever get one of those jerseys as he was one of the 17 people that were killed at Marjory Stoneman Douglas High School on Feb. 14.

Oliver’s parents and sister were guests of Wade for the Heat’s game on Saturday against the Detroit Pistons. Oliver’s sister stood next to Wade during the national anthem before the game. Wade then went on to score 11 points and grabbed six rebounds in a 105-96 Heat win. He played in an all black edition of his signature shoe, which had “Joaquin Oliver” written on the side.

Wade was then able to give the family one of his Vice edition jerseys as well as a pair of his shoes that he had custom made to include Oliver’s name and the Stoneman Douglas logo.

Check out these shoes @DwyaneWade has at his locker. He’s meeting with Joaquin Oliver’s parents today. pic.twitter.com/zv7GFbNoP7

Talking to the Sun-Sentinel’s Ira Winderman after Saturday’s game, Wade mentioned how he was grateful that the family was able to attend the game:

Wade also spoke about how his return to the Heat was right on time:

“It’s bigger than basketball. Obviously I’m back here to do a job on the court, in this locker room with this team. But the timing was perfect for me to come back here for this city and the state,” said Wade. “It’s like we both needed each other. I’m thankful I could come back and be able to be a leader and a voice in the community more so than even coming back here and scoring any baskets. That’s more important. The timing was right.”