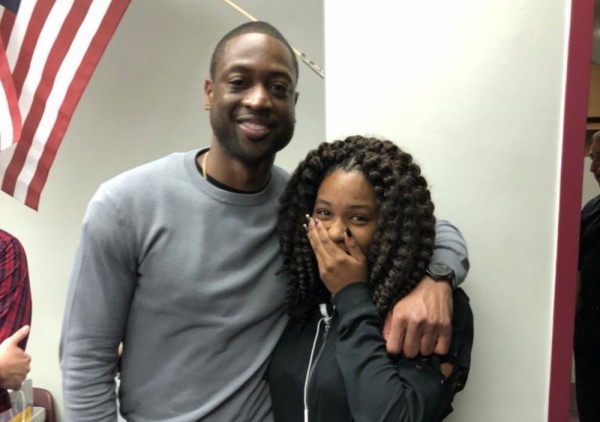 Ever since the tragic shooting at Marjory Stoneman Douglas High School rocked the state of Florida, the Miami Heat have acted as one of the grieving school’s biggest allies.

Shortly after the Feb. 14 shooting, the entire Heat organization honored the victims with a video memorial. Dwyane Wade has been especially connected to the school ever since it was revealed that one of the victims, 17-year-old Joaquin Oliver, was buried in his jersey.

Wade’s commitment to the students at Stoneman Douglas continued on Wednesday when the Heat icon visited the high school to show his support.

Much appreciation goes out to @DwyaneWade for visiting our school and showing his support. Changing the world, one dribble at a time. #MarchForOurLives pic.twitter.com/BDjXqxNluP

“I just wanted to come and say I’m inspired by all of you,” Wade said to a hallway full of students. “As someone out here in the public eye I am proud to say that I from this state because of you guys. Because of the future of this world, because of you guys.”

I just had a great conversation with some of the students at Stoneman Douglas High School about some important/impactful things that they have planned. I’m looking forward to being more involved in the change that they WILL create. #MSDStrong ??????

Wade himself has said that it seems he came back to Miami at the right time to help his grieving community in its time of need. With actions like these, it is clear that he is right.
[xyz-ihs snippet=”HN-300×250-TextnImage”]