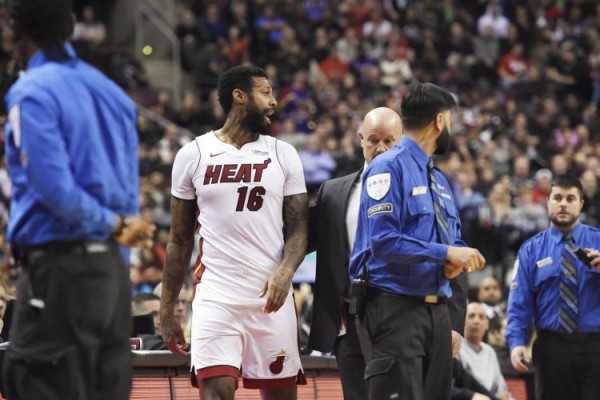 A pair of heated battles both during and in the immediate aftermath of the Miami Heat‘s dramatic road win over against the Toronto Raptors on Tuesday night resulted in consequences on Wednesday. That was when the league meted out penalties for both sides, including Heat forward James Johnson and point guard Goran Dragic.

With roughly eight minutes to go in the third quarter, Johnson and Toronto’s Serge Ibaka began throwing punches at each other near the Heat basket while waiting for an inbounds pass. The two players were given technical fouls and ejected from the game, with the NBA also suspending Ibaka for one game.

Dragic’s fine was due to the words exchanged between the guard and the Raptors’ DeMar DeRozan. Just after DeRozan’s desperation shot at the final buzzer fell far short, he and Dragic got into a heated argument. DeRozan’s $25,000 fine was the result of taking a swing in the vicinity of Dragic, which didn’t connect.

The win over Toronto marked the fifth straight win for Miami, which has little time to savor the win with a Wednesday night road clash against the Indiana Pacers on tap. That game will tip off just after 7 p.m. ET.
[xyz-ihs snippet=”HN-300×250-TextnImage”]