Miami Heat vs. Toronto Raptors Game Recap: Not For the Faint of Heart 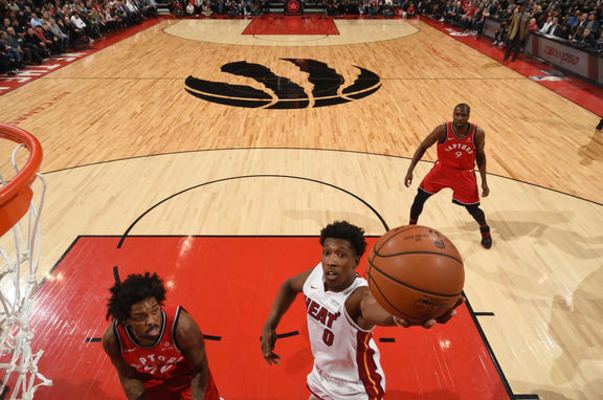 (Toronto, ON) – The Miami Heat had their work cut out for them on Tuesday night when they traveled to Air Canada Centre to face off against the Toronto Raptors. The game was an emotionally and physically taxing battle from start to finish. Both teams had players ejected, and both teams fought till the bitter end to try and get the victory.

Just as Sunday’s game had been decided by a last-second shot, so too was Tuesday night’s game. This time, it was Wayne Ellington who played the hero, as he drove to the basket along the baseline to score the decisive points with under a second left on the clock to win the game, 90-89.

“They played a little bit smaller so we just figured that we’d have to win this game in the 80s and try to win with getting defensive stops, make it a little bit ugly,” Heat head coach Erik Spoelstra said following the game. “It wasn’t pretty, but sometimes you have to find different ways to get the job done.”

The Heat enjoyed a 10-point lead at the start of the second half, but the Raptors quickly proved why they are considered one of the top teams in the Eastern Conference. They started the third period with an 11-2 run to bring the score to within one point, 53-52, with just over eight minutes left in the quarter.

The score wasn’t the only battle that took place on the court during the third period, either. Shortly after Toronto’s run, James Johnson and Serge Ibaka were ejected from the game after the two big men came to blows on the court.

Serge Ibaka and James Johnson are both ejected after throwing punches ? pic.twitter.com/9AP8l2SiYQ

The officials did a good job calming both teams down and play resumed shortly after. There was a noticeable edge to the game following the ejection, though, as both squads looked to come away with the victory.

The Heat managed to impose their will for much of the remaining third period and were up by as many as 12 points with just over a minute left in the quarter. Toronto hit back in the final minute, however, and when C.J. Miles hit two three-point shots in a row, Miami’s lead was cut in half. Josh Richardson, who had an uncharacteristically poor game with six points, six rebounds, four assists, and five turnovers, extended the Miami lead to eight points before the end of the third quarter. Still, it was clear the Raptors weren’t going to go away without a fight.

“You can’t play great offensively every game. It wasn’t my night tonight,” Richardson said following the game. “I tried to effect the game in other ways than that and I think I did a pretty decent job.”

Miami held onto its lead for the majority of the final frame, but the Raptors hung around and bit by bit were able to chip away at the Miami lead. When Bam Adebayo, who had one of his best games of his young career with 16 points, 15 rebounds, and five blocks, scored on a difficult layup attempt, Miami was up just six points with just 3:48 left in the game.

It was at that point that Toronto made their move. First, Delon Wright hit a corner 3-pointer as the shot clock expired with over three minutes remaining in the game. Then, DeMar DeRozan scored following a Richardson turnover, and scored again moments later on Toronto’s subsequent offensive possession. In less than two minutes, the Heat had watched their six-point lead evaporate and with two minutes left in the game, they were down for the first time since the first half.

The score was locked at 87-86 for the next minute and 40 seconds as both teams failed to capitalize on their opportunities. Finally, Goran Dragic, who had one of his most impressive games of the season with 24 points, 12 rebounds, and four assists, broke the seal and glided into the lane to give Miami the lead, 88-87.

With just 19 seconds left on the clock, it seemed like Miami’s one-point advantage was going to be enough, but DeRozan had other ideas. With no timeouts, the Raptors had to recover quickly, and that’s exactly what they did. DeRozan drove down into the lane and after missing his first attempt, the talented guard showed great determination to grab his own rebound and complete the putback to give his team a 89-88 lead.

The Heat called their final timeout to draw up a last-second play, but the chances seemed slim that they would be able to steal the win. That was until Ellington, who had gone scoreless in the second half after scoring 13 points in the first two quarters, grabbed the inbound pass and drove to the basket. He leaped to the rim and hung in the air before completing the difficult shot and the improbable victory.

With another late-game winner, the Heat have begun to solidify themselves as one of the most clutch teams in the NBA this season. They are proving that a lack of a traditional star does not mean they don’t have anyone to take last-second shots, as several different players have been coming up big when it matters most during their current five-game winning streak.

It should also be mentioned that since Hassan Whiteside‘s return from injury two weeks ago, the Heat have lost just one game. Whiteside proved why he is so valuable to his team on Tuesday night when he finished the game with 13 points, 15 boards, and two blocks in 30 minutes of play.

With a record of 23-17, Miami is now first in the Southeast Division and is making a case to be considered one of the better teams in the Eastern Conference. It won’t have much time to celebrate Tuesday night’s win, however. The Heat are back on the court tomorrow evening as they travel to Indianapolis to take on the Pacers.
[xyz-ihs snippet=”HN-300×250-TextnImage”]