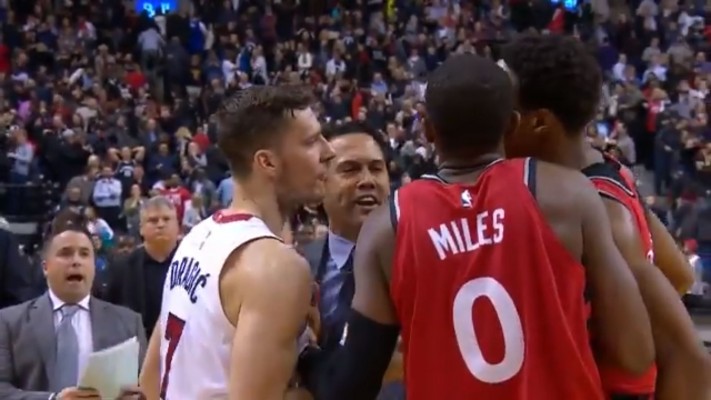 The Miami Heat came away with their fifth straight victory on Tuesday night, as they defeated the Toronto Raptors by a score of 90-89.

The game was intense, to say the least, due to the several altercations and back and forth between the two teams. First, Heat forward James Johnson was ejected in the third quarter for trading punches with Raptors center Serge Ibaka.

Then, as time was winding down and DeMar DeRozan threw a full-court heave to try and answer Wayne Ellington’s game-winner, the Compton native took exception to point guard Goran Dragic defending him on the heave.

Dragic, who finished the game with 24 points, 12 rebounds, and four assists, did not back down from DeRozan as the two got into a scuffle as the horn sounded. DeRozan even went as far as to take a swipe at Dragic’s face.

Scuffle #2 in Raptors-Heat: Dragić and DeRozan exchange words after the game ? pic.twitter.com/LGzLW3WA9W

Raptors-Heat matchups have always been intense over the years as even the regular-season matchups always bring with them a playoff-type atmosphere. Regardless of the several heated exchanges on Tuesday night, the Heat should be thrilled that they are now on a five-game winning streak and almost in fourth place in the Eastern Conference.
[xyz-ihs snippet=”HN-300×250-TextnImage”]