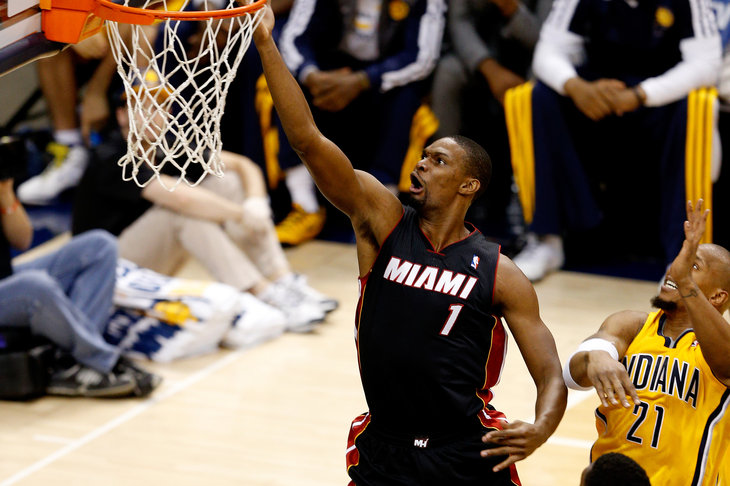 It’s an understatement to say that the Miami Heat need Chris Bosh to step up in Game 3 of the NBA’s Eastern Conference Finals. Perhaps having to take on David West and Roy Hibbert on defense has been affecting Bosh’s offensive game. In this Q&A with reporters after Friday’s practice, Bosh discusses the keys to the Heat winning Game 3, the impact of Paul George’s health on their preparation and defending Hibbert.

On not having home-court advantage:

“This is just an order that we haven’t played many times. But we don’t pay much attention to what our record is – home or away – we want to make sure that we’re taking care of business. We need to play at a high level and if we take care of the ball and do a better job of rebounding, (and) do all the small things, we’ll have a chance to win, and that’s all you can ask for.”

On the status of Paul George affecting Game 3:

“We prepare for him, like he’s gonna play. And that’s the best that we can do. And if he doesn’t go, it still really doesn’t matter; they’re gonna run the same sets. We figure that more guys will be aggressive, and sometimes it’s harder to play a team when their man guy is out. So no matter what happens, we have to play our game. We feel if we get to our game – whether Paul is playing or not – it suits us better.”

On the challenge of playing a team whose best player is out:

“Guys want to do well. This is the NBA; we’re all competitive. Guys want to set the stage and play well for themselves, their team, their family and show they can play. That’s major incentive to do well sometimes. Especially if a guy doesn’t get to play much, he gets out there, he’s like, ‘Hey, this is my chance. I have nothing to lose.’ He can play with a free mind, and that’s a dangerous guy.”

On whether they have improved in defending Roy Hibbert over the past year:

“Well, yeah. I mean, before, certain things we were trying to do (weren’t) really working for us, and that played to his advantage. I think now, our coverages are a little bit better, they can get better as they go. But it’s a work in progress. We still need to continue to play him well, try our best to keep him off the boards and if we limit them to one shot, that plays into our hands and gets him running a little bit more and that’s the game we want to get to.”

On what to do when Hibbert tries to get physical around the basket:

“Just stand your ground. But we’ve played post defense on plenty of guys, so you know, he’s not the biggest or strongest guy in the league. So, we’re OK.”