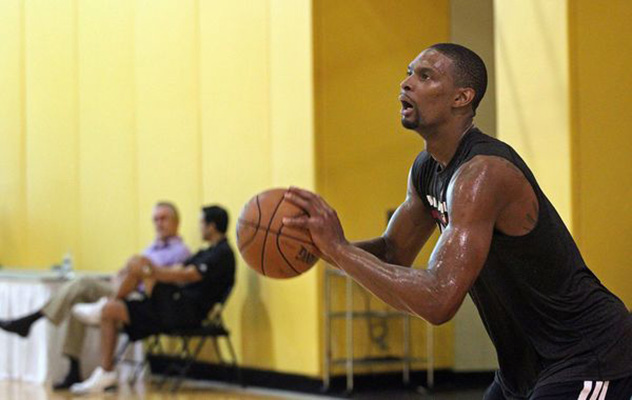 A sight that Miami Heat management, players and fans have been waiting for since February 21 took place earlier this week when Chris Bosh returned to the court for the first time since a diagnosis of blood clots abruptly ended his season.

While it wasn’t game action, the non-contact, on-court workout that was noted by Barry Jackson of the Miami Herald, helped alleviate much of the concern that resulted after the clots were discovered on one of Bosh’s lung by doctors in the South Florida area.

The issue first developed during the All-Star break, with Bosh eventually entering a local hospital on February 21. Once the clots were found, he missed Miami’s final 30 games of the season.

At the time of the potentially life-threatening diagnosis, Bosh began taking medication to dissolve the clots. That treatment was in conjunction with what’s expected to be limited physical activity throughout the summer.

Back in April, Bosh spoke about his recovery, saying, “I’m excited. I haven’t had a chance to work on my game. I’m going to actually get to work on my game. I feel like a young fellow again out there…this year I have the opportunity to build slowly and correct some things I need to correct and come back next year in the best shape of my life.”

Bosh then added, “As I got ill, the afterthought was maybe I need to miss basketball. I miss it. And I’ve still got 5 ½ more months. Maybe this is what I need. I need to recharge my passion because I was getting beat down a little bit over the last four years. That’s what success does.”

Last month, Bosh said he had begun working out, but this most recent news is the next step in his goal of being ready for the 2015-16 season opener for Miami.
[xyz-ihs snippet=”Responsive-Ad”]