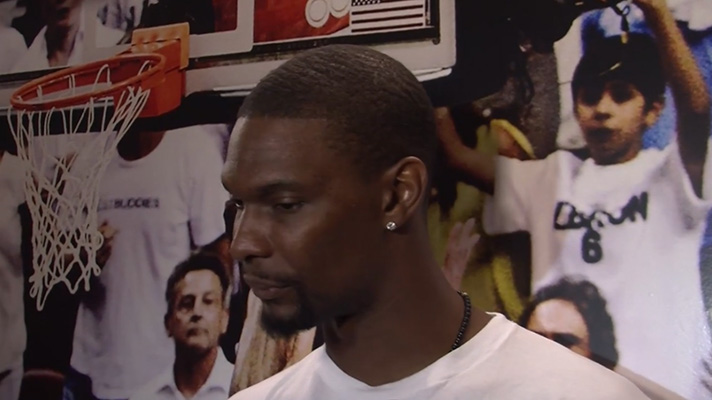 Chris Bosh hasn’t played basketball since February, but that doesn’t mean his life still doesn’t revolve around the game.

Over the last several days, Bosh has made media appearances on CNBC and ESPN Radio. During those appearances he spoke on the matter of his blood clots ailment that cut his 2014-15 season short, LeBron James leaving for the Cleveland Cavaliers last summer and the Miami Heat missing the playoffs for the first time since his arrival.

In regards to his blood clots injury, Bosh expressed how serious the situation was on ESPN Radio:

“I didn’t know what was going on with me, and it had been happening for about a month, and gradually it got worse and worse and worse. And at one point, I couldn’t breathe, because I had fluid in my lung.”

He also stated how he was playing through major discomfort before the situation was officially diagnosed, expressing how he shouldn’t have been playing, “but continued to play.”

His season-ending ailment put a big dent in the Heat’s chances of advancing to the playoffs for the first time in his five years in Miami. Bosh further commented on misplaced bravado and pride during the interview:

“The last four years, the way we had been competing, there were multiple times I had to do that. We all had to do that. It gets engrained in you, and we don’t want to admit that we’re fragile. We come with that cape and everything that comes with it. We get in that mind frame. I should have said something.”

While the Heat certainly missed Bosh’s presence during the second half of the 2014-15 season, it was LeBron departing for Cleveland that directly led to the Heat’s fall from a championship contender to a team just battling to make it to the postseason.

“Of course, I was disappointed, because we all wanted to keep things going. But I’m over it. You get over it fairly quickly.”

Now that the 31-year-old Dallas native has some time to sit back and watch basketball, he expressed his feelings of sitting at home during the NBA postseason to CNBC’s Fast Money Halftime Report:

“You can never count any of the guys out. You know the Bulls, they played well in Cleveland [Monday] night. Cleveland needs to get 100 percent healthy and, you know, get their whole team back, well, without Kevin Love as close to their whole team back as possible. The Warriors are rolling right now. So it will be really, really interesting to see what happens. I’m excited. It is like I am a fan of the game.”

And although James may be wearing a different uniform this season, Bosh commented on how LeBron and the Cavs will be able to move on without Love.

“LeBron’s a very focused guy. He’s very smart. He’s been here before. He knows how to handle it. That doesn’t make it any easier. But it will be interesting to watch.”

Bosh is expected to make a full recovery and be ready for the beginning of next season. He averaged 21.1 points and seven rebounds per game in 44 appearances this past season.
[xyz-ihs snippet=”Responsive-Ad”]