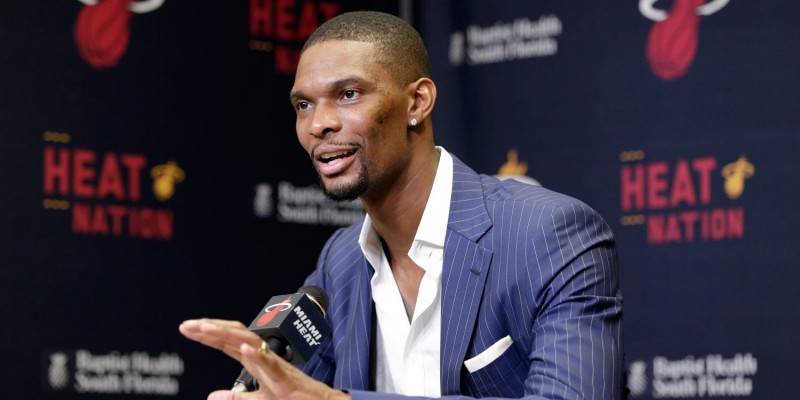 A couple days after defeating the Philadelphia 76ers in the regular season finale, the Heat conducted their final media session of the season.

There were statements from key figures such as Erik Spoelstra, Dwyane Wade, Chris Bosh and Goran Dragic in regards to the 2014-15 season, what to expect from the team in the future and whether players such as Dragic and Luol Deng will be back for the 2015-16 season.

Here’s a summary and some quotes from a few figures that took part in the exit interview media session.

Spoelstra reflected on the season, basically stating that the team had high expectations and was confident with its roster exiting training camp. He mentioned how the season ended up “taking a different course three or four different times,” which forced young players such as Tyler Johnson, Shabazz Napier and James Ennis into playing time.

He commended all three players’ contributions during the 2014-15 season. He had the following to say in regards to the growth of Johnson:

“These are the Miami Heat stories. Guys that are undrafted, it just doesn’t happen very often. There are less than five guys a year on average that actually make a roster and have a role. He’s relentless with his work ethic and his drive.”

In regards to Ennis:

“James was able to play 62 games and be in and out of the rotation a couple times but his strongest minutes and games were at the end. Player development is not just about the first five-and-a-half months, it’s how you can improve during the course of the season and James showed an ability to do that.”

On the topic of Napier:

“Shabazz was able to play basically two college seasons in his rookie season. What were the expectations from the outside? I don’t know. My expectations for him were just to learn our level of commitment, work ethic and player development and he did that. I think he really improved with his work ethic from July to where it is right now.”

Spoelstra also commented on other topics such as Deng and Dragic possibly entering free agency and what the goals are for next season.

Here is what he had to say in regards to Deng and Dragic: “We love them, hopefully they love us.”

He was also asked on what the goals are for next season:

“Pace, speed, quickness . . . let’s go. Players will see that right away in training camp. We have players best fit to play that style.”

Dragic was asked a variety of questions relating to his impending free agency, the style of play he’d like to see with his team next season and whether or not a fifth year would make a difference in a contract offer towards him.

On the matter of style of play: “I want to play a little faster than we did.”

On whether a fifth year the Heat would offer would make any difference: “It’s big. Every player wants to feel secure.”

On the topic of how style of play of a team is what is most important to him entering free agency:

“The most important thing is the team and the style because first of all I want to be happy. Happy to play the style of basketball that I want to play.”

Wade addressed his plans in regards to keeping himself in shape as he enters his 13th NBA season:

“I will keep myself plenty busy, make sure I’m focusing on what I need to. For me, it’s always just about working on my game. This year, I became a better post player, became more comfortable down there. I always figure out a way to keep myself being as efficient as I can be. I love to score. It’s going to be easy to work on trying to score. That’s what I love doing….I feel like I’ve got a few good years left.”

Bosh addressed his diagnosis of blood clots in February, his recovery and how he’s looking forward to the 2015-16 season. Here’s an excerpt of what he had to say:

“As I got ill, the afterthought was maybe I need to miss basketball. I miss it. And I’ve still got five more months, 5 1/2 more months … Maybe this is what I need. I need to recharge my passion because I was getting beat down a little bit over the last four years. That’s what success does. Now I can go back in the lab and work on my game”

There is little doubt that the Heat won’t be a better team in 2015-16. The key will be preserving the health of their franchise players (Bosh) and re-signing key pieces (Dragic) that will provide stability to the franchise for the long-term future.
[xyz-ihs snippet=”Responsive-Ad”]