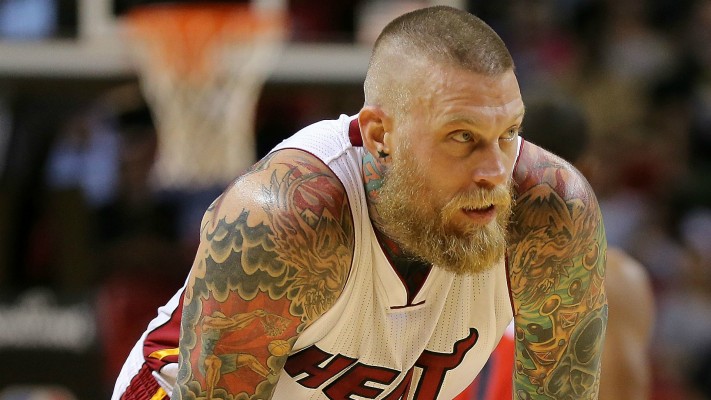 The Heat announced that Chris Andersen would miss the remainder of the team’s road trip prior to their game on Friday night versus the Denver Nuggets. Andersen suffered a left knee injury while playing just two minutes and 39 seconds of the team’s loss to the Los Angeles Clippers on Wednesday night.

INJURY UPDATE: Chris Andersen returned to Miami to have his left knee examined. He will miss the remainder of the road trip.

Head coach Erik Spoelstra gave a statement regarding Andersen’s injury, clarifying that the veteran would return to Miami to get an MRI:

“He’ll be back in Miami getting a MRI. We’ll see where he is after that.”

The 37-year-old has appeared in just seven games this season, as his playing time has seen a massive hit. Andersen has been on the trade block for months, but there haven’t been any teams on the market interested in the big man’s services. The Heat would like to shed Andersen’s $5 million salary, but time isn’t on their side—the trade deadline is on February 18th.

It is uncertain when exactly Andersen will make his return to the lineup. The Heat will travel to Oklahoma City to play the Thunder on Sunday night in the final game of their road trip. They will return to American Airlines Arena to play the Milwaukee Bucks on Tuesday night.
[xyz-ihs snippet=”Responsive-Ad”]