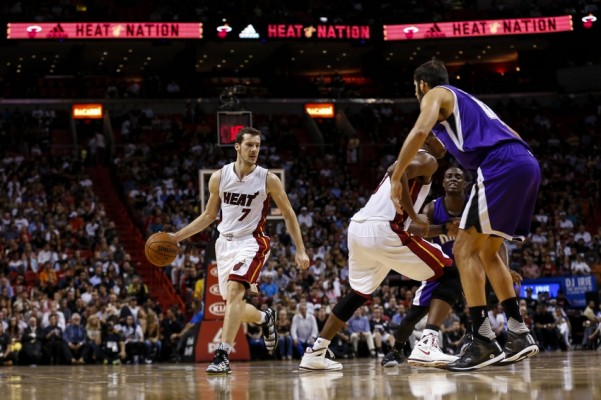 From the losses of four starters to the signings of nearly 10 new players, the Miami Heat had a very eventful summer.

Instead of relaxing from the heavy offseason, the team has reportedly been engaged in trade talks since the summer.

ESPN senior writer Zach Lowe recently revealed some interesting news about the Heat, hearing that the team has been in trade discussions with the Sacramento Kings.

“The easiest method: trade Goran Dragic without receiving a point guard in return, leaving the offense in the hands of (mostly) unproven ball-handlers. The Heat and Kings have had some vague trade talks since July — not necessarily involving Dragic, sources say — and given the Kings’ shaky point guard situation, it’s tempting to build deals sending Dragic to Sacramento. A half-dozen other teams are searching for a long-term answer at point guard,” says Lowe.

One prevalent rumor over the summer was a trade involving Goran Dragic to save cap space for franchise figure Dwyane Wade or go after a superstar, like Kevin Durant. It now looks like the Kings might have been the potential suitor.

After the Heat’s summers plan got botched, there has been speculation that the Heat could try to tank and trade away Dragic to further clean their salary space. Pat Riley has opted to hold on to the point guard for now but that doesn’t mean the unpredictable Heat president will for the whole season.

In addition to reporting that the Heat and Kings have had vague talks since July, Lowe has predicted that the Kings will trade Ben McLemore and Rudy Gay, who the Heat have been linked to in the past.

The ESPN insider also includes in his article that the Oklahoma City Thunder could be a team on the King’s radar.

“The trade front is quiet now; everyone in the bloated middle is waiting to see how good they are before pivoting up or down. The Kings may be the best bet to act early, since Gay politely told them he would very much like to leave. Keep an eye on the Thunder among potential Gay suitors,” says Lowe.

When you add a third party into the equation with the Heat and Kings, the possibilities are endless. Dragic could find himself in Sacramento, Gay in Oklahoma City and a flurry of expiring contracts and draft picks going Miami’s way.

The Heat may be waiting for the season to start to see what the team can do. If the team can compete for a playoff spot, this trade thought is worth scrapping. If not, the Heat would have no reason to hold onto Dragic, who at 30 doesn’t want to be on a lottery-bound team.

In an interview with David Aldridge of NBA.com, Dragic goes on to affirm that his current situation with the Heat is not what he signed up for.

“You’re right,” Dragic said. “But the main thing is, I want to win games. Of course, I want to win the championship. But, how you say: you need to go one step back to go two steps forward.”

The former All-NBA 3rd team guard could compliment DeMarcus Cousins and help the team secure a playoff spot while the Heat let youngsters Justise Winslow, Josh Richardson and Tyler Johnson get more time to grow together.

There are multiple scenarios that could play out as the season unfolds. However, don’t count out a Dragic trade as long as Riley is in command.
[xyz-ihs snippet=”Responsive-ImagenText”]