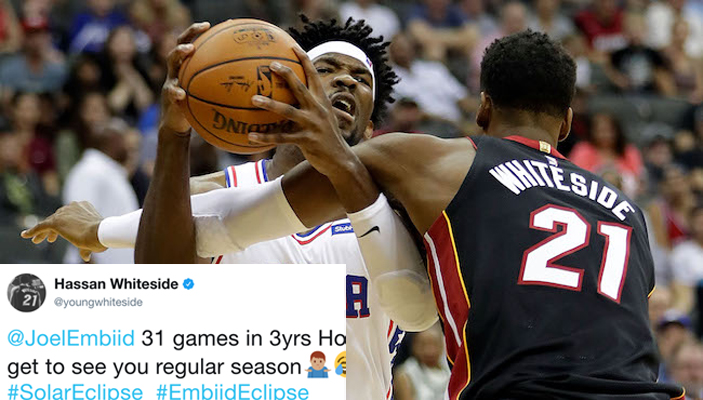 Miami Heat center Hassan Whiteside and Philadelphia 76ers center Joel Embiid went head to head on the court on Friday and took their beef to Twitter after the game.

During the matchup, which Miami lost 119-95, Whiteside got into early foul trouble and Embiid used that opportunity to talk trash to the Heat bench. Whiteside was called for three fouls in the first 2:21 including this one drawn by Embiid.

Embiid draws a foul and tells the Heat to take Whiteside out ? pic.twitter.com/VwZnpLPVAA

After the game, Whiteside responded to the tweet which set off an intense back-and-forth with Embiid.

Funny how y’all don’t show me telling him the same and 1-7 shooting ??‍♂️ or the first 2 flops I mean blocks. Lol y’all fan boys I swear?

Embiid, who scored only five points while shooting 1-of-7 from the field in the game, called out Whiteside in a series of tweets.

Dude they had to take your ass out or you would’ve fouled out in 5 min… And we’re talking about Preseason, not regular season….. #Softy https://t.co/IAIBDDypFK

And keep caring about stats and not your team success….. your +/- was ass @youngwhiteside #Softy

My bad y’all , I thought I was using my burner account #TheProcess

Whiteside responded by pointing out the fact that Embiid has only played 31 games in his whole injury-plagued career.

@JoelEmbiid 31 games in 3yrs Hopefully I get to see you regular season??‍♂️???‍♂️? #SolarEclipse #EmbiidEclipse https://t.co/iaFfK3h3V6

This is not the first time the two centers have gone after each other on social media. Last season, Embiid called Whiteside “BBQ chicken” after a loss on Instagram.

These two centers will face off again on Feb. 2nd during the regular season.
[xyz-ihs snippet=”Responsive-ImagenText”]