Report: Celtics Had to Separate Marcus Smart and Jaylen Brown Before ‘Physical Altercation’ Could Occur 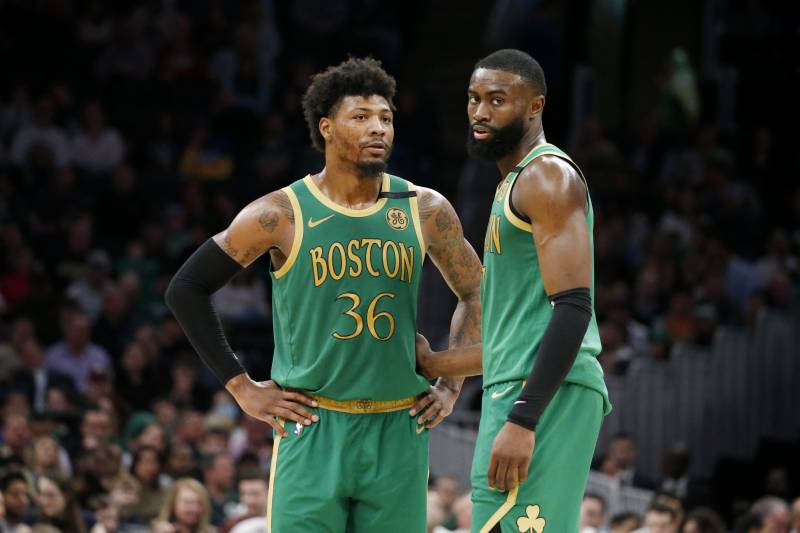 After a disappointing loss to the Miami Heat in Game 2 of the Eastern Conference Finals, some members of the Boston Celtics reportedly had an altercation with one another inside the locker room.

Details have emerged on what went down behind the doors.

“Boston Celtics’ Marcus Smart and Jaylen Brown had a heated confrontation inside that locker room after the Game 2 loss and needed to be separated by teammates, multiple sources told The Athletic,” wrote Shams Charania. “Smart, who is widely regarded as Boston’s emotional leader, was heard shouting inside the postgame locker room after the Celtics’ loss to Miami.

“Sources told The Athletic that Smart stormed into the Celtics postgame locker room saying that other players needed to be held accountable and not simply point the finger toward him when things are going wrong. As Smart continued and his voice grew louder, sources said Brown snapped back and shouted that Celtics players must stay together and that their actions must come as a team, not individually, and that Smart needed to cool off. Those sources added Smart had verbal exchanges with a couple of the assistant coaches during the game.

“Smart and Brown had a tense interaction inside the locker room, with objects thrown around. Teammates diffused the situation before any physical altercation could take place, sources told The Athletic.

“Smart and Brown have smoothed tensions over since the verbal spat, and one source said the Celtics would learn from it and move on from the episode Friday ahead of a pivotal Game 3 on Saturday.

“‘They will move past this and focus on the task,’ a source said late Thursday.”

So far in the series, it is the Heat who have shown the ability to stay poised under pressure.

In the series opener, Miami faced a 14-point deficit early in the fourth quarter. But the team rallied to take the game to overtime behind the heroics of Tyler Herro and Jimmy Butler.

It was Bam Adebayo’s turn to save day in the extended period with his clutch block on Jayson Tatum’s dunk attempt.

Game 2 saw another Miami comeback. Down 17 points late in the first half, the Heat clamped down on defense in the second half to win, 106-101.

The Celtics have a couple days to regroup to avoid facing an insurmountable 3-0 hole in the series.