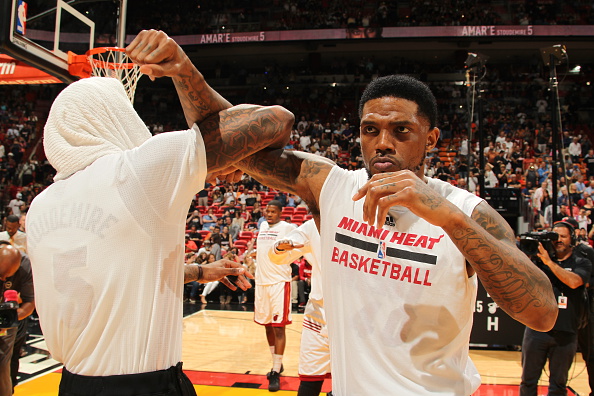 Udonis Haslem is as beloved a figure in Miami sports as there is. Since signing with the Miami Heat as an undrafted rookie in 2003, Haslem has enjoyed 14 seasons in Miami. According to Barry Jackson of the Miami Herald, however, that all could have come to an end this offseason.

On Tuesday, Jackson reported that he had asked Haslem if he had thought about joining the Cleveland Cavaliers this offseason.

“Yeah,” he said. “I got an interesting call from Cleveland. My son is out there [as a student and football player] at the University of Toledo in Ohio. It was something to consider.”

Haslem also alluded that his agent Leon Rose had spoken to Cavs management.

“There might have been some conversations there,” Haslem said.

Eventually though, Haslem decided that Miami was the only place he could see himself playing.

“I can’t imagine being anywhere else,” Haslem said. “I’m all heart and going somewhere else, my heart just wouldn’t be in it. I just wouldn’t see the same player regardless of the opportunity to play and the minutes.”

“This is the best place for me. I really want these guys to get this trophy. These guys work hard, they deserve it. I would love to see them have a chance to raise that trophy at the end of the season.”

Finally, Jackson asked Haslem if Dwyane Wade‘s decision to sign with the Cavs had made him regret his decision at all.

“It would have been funny [with Wade there] but I don’t regret the decision I made,” Haslem said. “I’m where I’m supposed to be, I’m where I need to be. I’m where I’m most effective, even though it’s not on the basketball court, I would like to think I impact this organization, this team just by bringing my presence and everything else.”

Seeing Haslem playing anywhere other than Miami would have been  downright painful for the Miami faithful. Luckily, it looks like even the prospect of joining forces with Wade and LeBron James couldn’t convince the all-time Heat legend to leave the team and city that he loves.
[xyz-ihs snippet=”Responsive-ImagenText”]