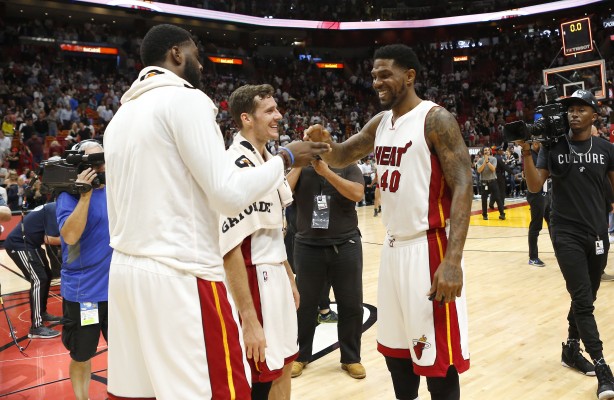 In spite of all the moving players, new rosters and drama over the past few years, one player has been remained faithful to the Miami Heat organization. That same player picked up a tremendous honor Friday afternoon.

The teammate with the biggest impact on and off the court. Check out the #PlayersVoice Award winners for Best Teammate. pic.twitter.com/F1UFnt6Qdu

Although the battle-scarred power forward has seen his stats diminish in the past few seasons, the 36-year-old has been a tremendous mentor to the team’s younger players. The 14-year veteran, who’s spent his whole career in Miami, has earned loads of praise for his leadership from his teammates and coaching staff.

From former teammates like Chris Bosh, who called Haslem one of his best teammates to current star Hassan Whiteside, who Haslem has intentionally uplifted, the franchise’s all-time leading rebounder has had a phenomenal impact on the mental preservation and direction of the team.
[xyz-ihs snippet=”HN-Native-EndofArticle”]