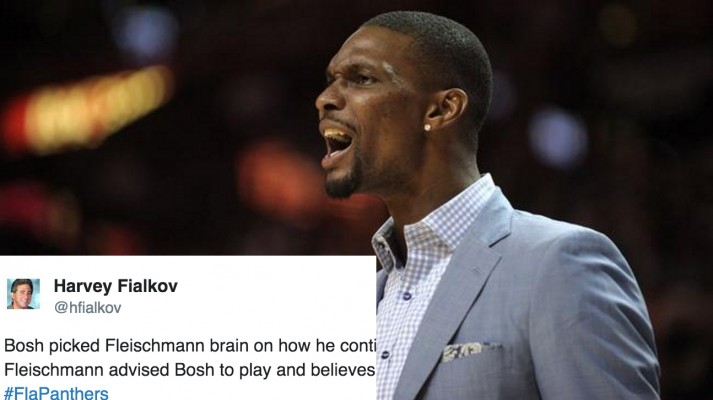 While there is still an ominous cloud hanging over Chris Bosh‘s status for next season, there is another South Florida athlete that can relate better than most. Just a couple years ago, former Florida Panthers left winger Tomas Fleischmann faced the exact same situation that Bosh is in now.

The Czech Republic native was diagnosed with a genetic blood disorder in 2009, but Fleischmann’s playing career wasn’t affected until 2011 when his shortness of breath led to the discovery of blood clots in both lungs. He immediately began treatment and over the next six months he was often told that he wouldn’t ever be able to play again. Sound familiar?

Fleischmann sought a second opinion and began a regiment which required him to take blood thinners every day. There were very few teams willing to take a chance on the winger, but Florida Panthers manager Dale Tallon decided to take a leap of faith and signed him to a four-year deal in 2011.

So what does this have to with Bosh? Well, it turns out that Bosh has been in contact with Fleischmann to get some advice on how to deal with his own situation going forward.

Bosh picked Fleischmann brain on how he continued to play with it. Fleischmann advised Bosh to play and believes he will #FlaPanthers

Fleischmann didn’t want to marginalize the significance of the serious illness. He talked about many of the precautions he had to take including anticoagulant injections after every practice or game and wearing a rubberized suit that protects him from the dangers of pressurized cabins when his team flies for games.

A regimen change is likely in the cards for Bosh if things work out and he is cleared to play.

“I got used to it,” Fleischmann said last year. “It’s been four years now and it doesn’t bother anymore.”

Fleischmann was traded from the Panthers in 2015 and has bounced around the NHL since then. He is currently a free agent.

This is definitely a positive sign for Miami Heat fans because a healthy, available Bosh changes the outlook of the entire season. Bosh has been posting workout videos to let his fans know that he’ll be ready for the season, but the decision will be left to the Heat’s medical team to clear him before we can see him in a Heat uniform again.
[xyz-ihs snippet=”Responsive-ImagenText”]