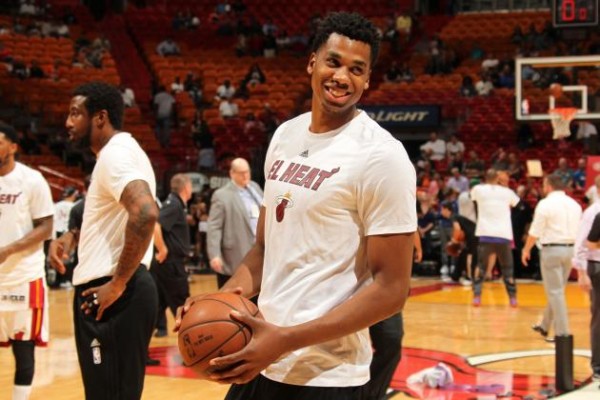 A month ago Miami Heat center Hassan Whiteside’s future with the team was up in the air. Going into the All-Star break, the 7-footer was suspended, in several trade rumors and criticized for his team being better defensively without him on floor. Needless to say, the Heat’s golden acquisition didn’t show the impact worthy of a massive payday come free agency.

Since the break, Whiteside has thrived in an established role off the bench and has filled in for Chris Bosh nicely. In 15 games, the center is averaging 17.5 points, 13.8 rebounds, 3.4 blocks and is shooting 81 percent from the free-throw line. Playing some of the best basketball of his career, Whiteside’s play is not only inflating his stats but translating into team victories as the Heat have gone 10-5 during the stretch.

Fortunately for the soon-to-be free agent, the most important person has taken note of his improved play: Pat Riley. The general manager expressed his pleasure with the way the 26-year old has played lately, per Jason Lieser of the Palm Beach Post:

“I’ve never been around that kind of turnaround. We’ve had some players that we’ve opened our eyes up on, but I think what Hassan did last year and what he’s doing now, his level of play– it’s just all about more experience, more reps, understanding how important he is for us.

“But in my 50 years in the NBA, I have never seen that kind of phenomenon. I know this is hurting me right now as far as his free agency goes because I’m complimenting him, but he’s grown a lot.”

Riley’s right. While everyone seems to think the 26-year-old should have it all figured out, the former second-round pick is just in the fourth season of his career (127 total games) and will be playing his first full season this year. The growth in his one-and-a-half years with the Heat has shown tremendous improvement and unparalleled impact for a player that had spent extended time in the D-League and overseas. From the unwise on-court decisions to the padding of stats, Whiteside has altered his vision and focused on wins over anything else during the second half of the season.

Post All-Star break, the Marshall University product is 8th among centers in points, 2nd in rebounding, and 1st in blocks. In between the elite defensive play and offensive development, it’s hard to argue that Whiteside isn’t one of the best centers in the league.

Despite being paid less than $1 million this season, Whiteside is set to make big bucks this upcoming summer as numerous teams will try to pry the talented big man. Whether the Heat are willing to give their prized possession max dollars or not will only be told in time but the uncertainty in Whiteside’s impact has definitely been erased these past few weeks. Riley’s comments hint at a confident interest in the budding star and one that could tell a lot come free agency.
[xyz-ihs snippet=”Responsive-Ad”]