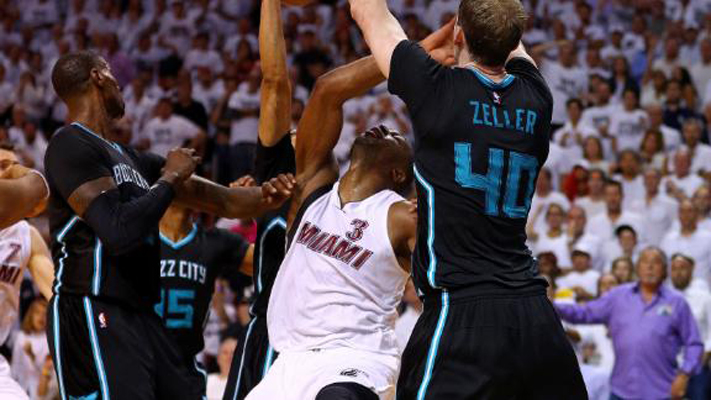 Dwyane Wade may not agree with it, but the referees were correct in their non-call at the end of Game 5 last night, according to the NBA.

In the NBA’s last two minute report of the Miami Heat’s loss to the Charlotte Hornets last night, the league states that the Hornets’ Cody Zeller did not foul Wade upon his drive to the hoop with five seconds remaining in the game. This ended up being the deciding play of the contest, as the Hornets had led 90-88 at that point.

League says after review, the non-call on Dwyane Wade was correct last night.

The report on the play is stated as follows:

“Zeller (CHA) comes towards Wade (MIA) from across the restricted area, planting his foot and jumping vertically to defend Wade’s shot. Zeller absorbs contact when it occurs and, while his arms are not completely vertical, multiple angles confirm they do not make contact with Wade. Therefore, Zeller maintains a legal guarding position as he attempts to defend the shot.”

The non-call sparked outrage from Wade, who clearly believed he was fouled on the shot attempt.

After winning the first two games of the series in dominant fashion, the Heat are now one game away from elimination. Game 6 will be played in Charlotte on Friday night.
[xyz-ihs snippet=”Responsive-Ad”]