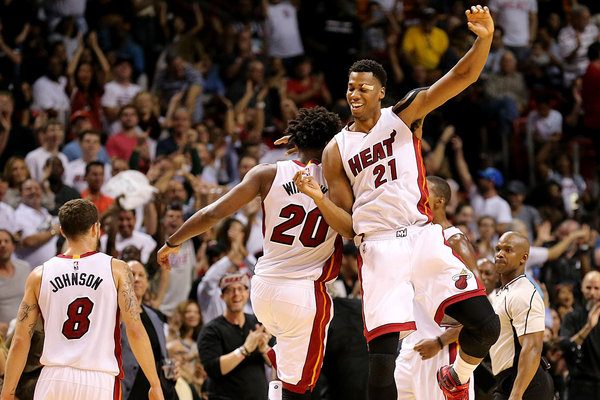 The development of Miami Heat center Hassan Whiteside has had its fair share of bumps along the way, but according to rookie teammate Justise Winslow, Whiteside’s play this season is deserving of a berth on the Eastern Conference All-Star squad.

Winslow made the case on behalf of Whiteside in The Player’s Tribune — the Derek Jeter-backed online publication which offers athletes a venue to express their opinions.

Writing that Whiteside is underrated and has been playing at an “elite, elite level,” Winslow focuses primarily on his teammate’s league-leading 3.78 shot-blocking average.

The belief by Winslow is that Whiteside’s mere presence on the court affects the mindset of opposing shooters:

“Hassan gets love, definitely, but I don’t think people fully appreciate just how game-changing his shot-blocking presence can be during the course of a game,” said Winslow. “It’s not even the blocks themselves. Most of the time, honestly, it’s just the idea of his blocks, the fear that a block might be coming, that is enough to tilt a play in our favor.”

Winslow then goes on to provide some anecdotal proof of Whiteside’s intimidating potential:

“I’ve seen really good teams overhaul entire offensive sets because of Hassan. I’ve seen world-class shooters sense Hassan in their periphery and rush up a quick one (they always miss),” said Winslow. “I’ve seen big-time dunkers hear Hassan’s footsteps and suddenly get shook, mid-air, and hit ’em with the fadeaway. I’m telling you: It’s crazy what teams are willing to do to avoid Hassan. And don’t get me wrong, I get it. I’d do it, too.”

Closing out the article with an appeal to vote Whiteside into the All-Star Game, set for the Air Canada Centre in Toronto on February 14, Winslow uses his teammate’s shot-blocking prowess as a metaphor:

“So, you know, it’s your vote, and do your thing. Vote for my guy or don’t. It’s cool. But if you do vote for another center, then my advice is to come strong when you click,” said Winslow. “Otherwise, who knows, Hassan might block it. He’s pretty much blocked everything else.”