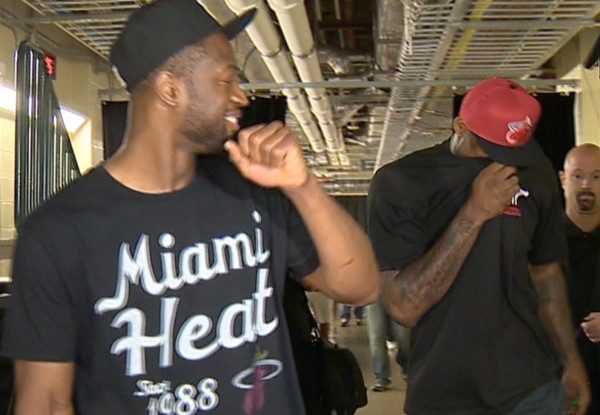 The retired star recounted how James and Wade’s decision to mock Dirk Nowtizki for being sick propelled the Mavs to a championship.

"Oh, it's a wrap…y'all just won us the championship."

When @realtuffjuice saw @KingJames & @DwyaneWade mocking @swish41 in the halls of the AAC before Game 5 of the 2011 NBA Finals…he knew the @dallasmavs could start planning a parade through the streets of Dallas. #MFFL pic.twitter.com/kYiyEKwb4W

“When Dirk got sick and I mean he was sick,” Butler said. “Me personally I did not for the life of me, for the life I did not think that Dirk was going to be able to play. And I’ll never forget him being mocked by a good friend of mine, the godfather to one of my kids, Dwyane Wade, and LeBron James. We saw the video, like we saw the visual, of like them coughing and making fun of the whole situation.

“And when he had got wind of people thinking that he wasn’t built for the moment like he was just dialed into a whole nother level. And it immediately just shifted, where I’m telling you I say this with the utmost confidence, I knew that we was going to have a parade in Dallas. That moment right there when that happened and I just seen his focus, he was already dialed in but he just took it there. I was like it’s a wrap. Y’all just won us the championship. I was like thank you, thank you for doubting him and mocking him in this moment because like he’s just dialed in on a whole nother level now.”

Butler, who started his career with the Heat, did not play in the 2011 NBA Finals due to injury.

However, that allowed Butler to get a special inside view on everything that went down. Perhaps watching Nowitzki turn it on and display vindictive performances was the best part.

With the Heat already stealing the 2006 championship from Nowitzki and the Mavs, the 7-foot superstar didn’t need any more motivation to beat Miami. Yet, it appears Wade and James’ choice to lampoon Nowtizki costed them immensely.

The Mavs icon averaged 26.0 points, 9.7 boards and 2.0 assists per game during the 2011 NBA Finals. Due to his stardom and the team’s strong defense, the Mavs beat the Heat in six games.

Nonetheless, the Heat lost a series they probably could have won. After all, Wade, James and Chris Bosh were all in the collective acme of their careers.